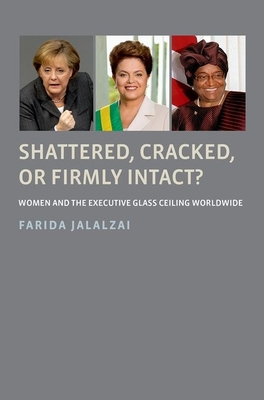 
Not On Our Shelves—Ships in 1-5 Days
(This book cannot be returned.)
How do men's and women's paths to political office differ? Once in office, are women's powers more constrained than those of men? The number of women in executive leadership positions has grown substantially over the past five decades, and women now govern in vastly different contexts around the world. But their climbs to such positions don't necessarily correspond with social status and the existence of gender equity. In Shattered, Cracked, or Firmly Intact? Farida Jalalzai outlines important patterns related to women executive's paths, powers, and potential impacts. In doing so, she combines qualitative and quantitative analysis and explores both contexts in which women successfully gained executive power and those in which they did not. The glass ceiling has truly shattered in Finland (where, to date, three different women have come to executive power), only cracked in the United Kingdom (with Margaret Thatcher as the only example of a female prime minister), and remains firmly intact in the United States. While women appear to have made substantial gains, they still face many obstacles in their pursuit of national executive office. Women, compared to their male counterparts, more often ascend to relatively weak posts and gain offices through appointment as opposed to popular election. When dominant women presidents do rise through popular vote, they still almost always hail from political families and from within unstable systems. Jalalzai asserts the importance of institutional features in contributing positive representational effects for women national leaders. Her analysis offers both a broad understanding of global dynamics of executive power as well as particulars about individual women leaders from every
region of the globe over the past fifty years. Viewing gender as embedded within institutions and processes, this book provides an unprecedented and comprehensive view of the complex, contradictory, and multifaceted dimensions of women's national leadership.