The Resistance: The Dawn of the Anti-Trump Opposition Movement (Paperback) 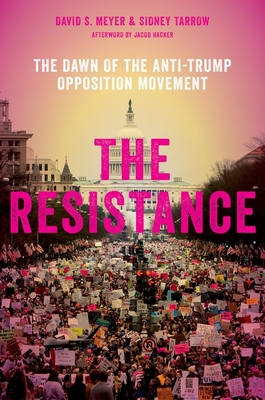 The Resistance: The Dawn of the Anti-Trump Opposition Movement (Paperback)


Not On Our Shelves—Ships in 1-5 Days
Even before the 2016 presidential election took place, groups and individuals angry at Donald Trump, and frightened about what a Trump presidency could mean, were taking to the streets. After the election, and particularly after he inaugural, the protests continued. Over time, the Resistance was joined by a broad variety of groups and embraced an increasing diversity of tactics. In The Resistance, David S. Meyer and Sidney Tarrow have gathered together a cast of eminent scholars to tackle the emergence of a volatile and diverse movement directed against the Trump presidency. Collectively, the contributors examine the origins and concerns of different factions of this movement, and evaluate their prospects for surviving and exercising political influence. Through a range of analytical and methodological approaches, The Resistance offers both an overview of the broad scope of the emerging movement and sharp analyses of the campaign as it works through the numerous crises that the
Trump era has introduced.
David S. Meyer is Professor of Sociology, Political Science, and Planning, Policy, and Design, at the University of California, Irvine. His general areas of interest include social movements, political sociology, and public policy, and he is most directly concerned with the relationships between social movements and institutional politics. He is author of many academic articles, and author or coeditor of 8 books; he blogs at Politicsoutdoors.com. Sidney Tarrow (PhD, Berkeley, 1965) is the Emeritus Maxwell M. Upson Professor of Government at Cornell University and an Adjunct Professor at the Cornell Law School. Tarrow has his BA from Syracuse, his MA from Columbia, and his PhD from Berkeley. A fellow of the American Academy of Arts and Sciences, Tarrow has served as Program co-Chair of the American Political Science Association Annual Meeting and as President of the APSA Section on Comparative Politics. Tarrow has been visiting professor at the Institut d'Etudes Politiques, the Central European University, the European University Institute, and the University of Trento.