What Do We Mean When We Talk about Meaning? (Hardcover) 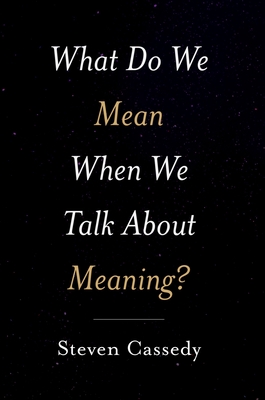 What Do We Mean When We Talk about Meaning? (Hardcover)


Not On Our Shelves—Ships in 1-5 Days
A comprehensive journey through the history of meaning, from antiquity to modern day. The word meaning appears often in our daily lives: religious leaders holding out the promise of meaning for their followers, self-help manuals seeking to demonstrate the power of meaning to enrich our lives, and most frequently people questioning the meaning of life. The word carries a multitude of
connotations, from purpose to value and essence to mysterious truth, but this diversity of understanding is rarely explored. In What Do We Mean When We Talk About Meaning?, Steven Cassedy tells the story of how a word that began by denoting signifying and intending came to acquire such a broad array of sub-definitions. The book begins with the early Christian thinkers who believed meaning could be read from the
world as if it were holy scripture, then moves into the philosophers who adapted this notion and eventually the Romantic-era Germans that coined the meaning of life, a phrase that later traveled to Great Britain, the United States, and Russia. The book also extends into the twentieth century, when
meaning acquired its greatest power in the realms of religion, psychotherapy, and self-help, all of which helped it to accumulate the fluidity and ambiguity it still displays today.

Steven Cassedy is the author of six previous books, including To the Other Shore: The Russian Jewish Intellectuals Who Came to America (Princeton, 1997), Dostoevsky's Religion (Stanford, 2005), and Connected: How Trains, Genes, Pineapples, Piano Keys, and a Few Disasters Transformed Americans at theDawn of the Twentieth Century (Stanford, 2014), which won a gold medal in US history at the Independent Publisher Book Awards (IPPY). He retired as a Distinguished Professor of Literature and Associate Dean of the Graduate Division at the University of California, San Diego, in 2018 and now liveswith his wife Patrice, a playwright, in Riverdale, Bronx.