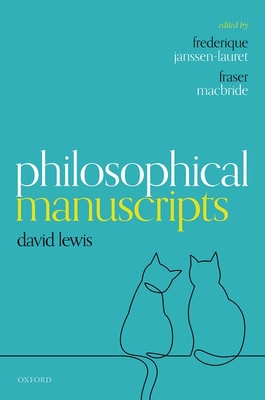 
Coming Soon—Pre-Order Now
David Lewis (1941-2001) was a celebrated and influential figure in analytic philosophy. When Lewis died, he left behind a large body of unpublished notes, manuscripts, and letters. This volume contains two longer manuscripts which Lewis had originally intended to turn into books, and thirty-one shorter items. The longer manuscripts are 'The Paradoxes of Time Travel', his David Gavin Young Lectures at the University of Adelaide, and 'Confirmation Theory', which is based on a graduate course on probability and logic that he gave at UCLA. Lewis's described his purposes in 'The Paradoxes of Time Travel' as being, (1) to solve a philosophical problem hitherto largely ignored or casually mis-solved by philosophers EL]; (2) to introduce the layman to various topics in metaphysics, since our problem turns out to connect with many more familiar ones; and (3) to show of several of my favorite doctrines and methods in metaphysics'. By contrast, 'Confirmation Theory' is a technical work in
which Lewis aimed to present in a unified fashion what he considered to be the best from competing theories of confirmation. Lewis described the work as 'Mathematically self-contained, with proofs for the major theorems; but the mathematics is kept down to hairy high-school algebra'. The thirty-one shorter items cover such topics as causation, freedom of the will, probability, counterparts, reference, logic, value, and divine evil. They are included here both for their intrinsic philosophical interest and their historical value. This volume also contains an intellectual biography of the young David Lewis by the editors.