A History of Russian Literature (Paperback) 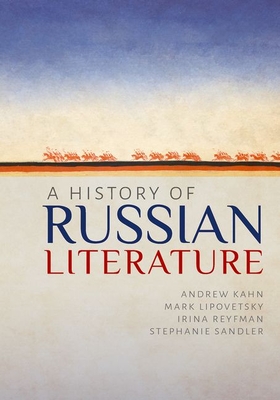 A History of Russian Literature (Paperback)


Coming Soon—Pre-Order Now
Russia possesses one of the richest and most admired literatures of Europe, reaching back to the eleventh century. A History of Russian Literature provides a comprehensive account of Russian writing from its earliest origins in the monastic works of Kiev up to the present day, still rife with the creative experiments of post-Soviet literary life. The volume proceeds chronologically in five parts, extending from Kievan Rus' in the 11th century to the present day. The coverage strikes a balance between extensive overview and in-depth thematic focus. Parts are organized thematically in chapters, which a number of keywords that are important literary concepts that can serve as connecting motifs and 'case studies', in-depth discussions of writers, institutions, and texts that take the reader up close and personal. Visual material also underscores the interrelation of the word and image at a number of points, particularly significant in the medieval period and twentieth century. The History addresses major continuities and discontinuities in the history of Russian literature across all periods, and in particular brings out trans-historical features that contribute to the notion of a national literature. The volume's time range has the merit of identifying from the early modern period a vital set of national stereotypes and popular folklore about boundaries, space, Holy Russia, and the charismatic king that offers culturally relevant material to later writers. This volume delivers a fresh view on a series of key questions about Russia's literary history, by providing new mappings of literary history and a narrative that pursues key concepts (rather more than individual authorial careers). This holistic narrative underscores the ways in which context and text are densely woven in Russian literature, and demonstrates that the most exciting way to understand the canon and the development of tradition is through a discussion of the interrelation of major and minor
figures, historical events and literary politics, literary theory and literary innovation.

Andrew Kahn, St Edmund Hall, Oxford, Mark Lipovetsky, University of Colorado-Boulder, Irina Reyfman, Columbia University, Stephanie Sandler, Harvard University Andrew Kahn is Professor of Russian Literature at the University of Oxford. He is the author and editor of several books on the Russian eighteenth-century and Alexander Pushkin, including Pushkin's Lyric Intelligence (2008). He has published widely on the Russian eighteenth-century and history of ideas, and is the author of many articles on twentieth-century Russian poetry. In the Oxford World's Classics he has edited and introduced Pushkin's Queen of Spades and Other Stories (1997), Montesquieu's Persian Letters (2008), Lermontov's Hero of Our Time (2013), and Tolstoy's Death of Ivan Ilyich and Other Stories (2015). Mark Lipovetsky is Professor of Russian Studies at the University of Colorado at Boulder. He is the author of seven books on Russian literature and culture including Russian Postmodernist Fiction: Dialogue with Chaos (1999), Paralogies: Transformations of the (Post)Modernist Discourse in Russian Culture of the 1920s-2000s (2008), and Performing Violence: Literary and Theatrical Experiments of New Russian Drama (with Birgit Beumers; 2009). He co-edited the Dictionary of Literary Biography: Russian Writers Since 1980 (2003), Politicizing Magic: An Anthology of Russian and Soviet Fairy Tales (2005), Veselye chelovechki: Cult Heroes of Soviet Childhood (2008), and A Non-Canonical Classic: D. A. Prigov (2010), Charms of Cynical Reason: The Trickster's Transformations in Soviet and post-Soviet Culture (2011), and edited (with Evgeny Dobrenko) Russian Literature since 1991 (2015). Irina Reyfman is Professor of Russian Language and Literature at Columbia University. In her studies, Reyfman focuses on the interaction of literature and culture, examining both how literature reacts to cultural phenomena and how it contributes to the formation of cultural biases and forms of behavior. Reyfman is the author of How Russia Learned to Write: Literature and the Imperial Table of Ranks (2016), Vasilii Trediakovsky: The Fool of the `New' Russian Literature (1990), and Ritualized Violence Russian Style: The Duel in Russian Culture and Literature (1999); the latter book also appeared in Russian (2002). She is also a co-editor (with Catherine T. Nepomnyashchy and Hilde Hoogenboom) of Mapping the Feminine: Russian Women and Cultural Difference (2008). Stephanie Sandler is the Ernest E. Monrad Professor of Slavic Languages and Literatures at Harvard University. She has written on Pushkin and on the legends surrounding him in Russian culture, including Distant Pleasures: Alexander Pushkin and the Writing of Exile (1989) and Commemorating Pushkin: Russia's Myth of a National Poet (2004). Other interests include ideas of selfhood and identity in Russian literature and film, which led to an edited volume, Self and Story in Russian History (2000, with Laura Engelstein); and questions of sex and gender, subject of another edited volume, Sexuality and the Body in Russian Culture (1993, 1998, with Jane Costlow and Judith Vowles). She has edited a pioneering collection of essays on the contemporary Moscow poet Olga Sedakova, published in Russia in 2017 and due out in English with Madison University Press. Her current work is on contemporary Russian poetry, and she has been translating several poets.