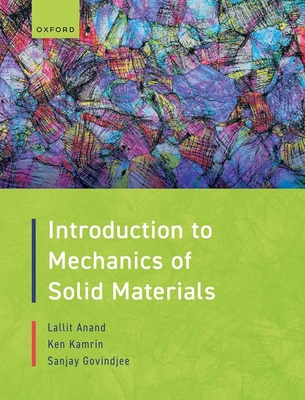 
Coming Soon—Pre-Order Now
Introduction to Mechanics of Solid Materials is concerned with the deformation, flow, and fracture of solid materials. This textbook offers a unified presentation of the major concepts in Solid Mechanics for junior/senior-level undergraduate students in the many branches of engineering - mechanical, materials, civil, and aeronautical engineering among others. The book begins by covering the basics of kinematics and strain, and stress and equilibrium, followed by a coverage of the small deformation theories for different types of material response: (i) Elasticity; (ii) Plasticity and Creep; (iii) Fracture and Fatigue; and (iv) Viscoelasticity. The book has additional chapters covering the important material classes of: (v) Rubber Elasticity, and (vi) Continuous-fiber laminated composites. The text includes numerous examples to aid the student. A substantial companion volume with example problems is available free of charge on the book's companion website.