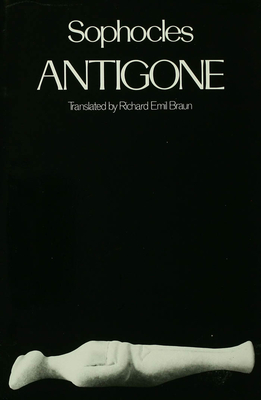 
Not On Our Shelves—Ships in 1-5 Days
Based on the conviction that only translators who write poetry themselves can properly recreate the celebrated and timeless tragedies of Aeschylus, Sophocles, and Euripides, the Greek Tragedy in New Translations series offers new translations that go beyond the literal meaning of the Greek in order to evoke the poetry of the originals. The series seeks to recover the entire extant corpus of Greek tragedy, quite as though the ancient tragedians wrote in the English of our own time. Under the editorship of Peter Burian and Alan Shapiro, each of these volumes includes a critical introduction, commentary on the text, full stage directions, and a glossary of the mythical and geographical references in the plays. This finely-tuned translation of Sophocles' Antigone by Richard Emil Braun, both a distinguished poet and a professional scholar-critic, offers, in lean, sinewy verse and lyrics of unusual intensity, an interpretation informed by exemplary scholarship and critical insight. Braun presents an Antigone not marred by excessive sentimentality or pietistic attitudes. His translation underscores the extraordinary structural symmetry and beauty of Sophocles' design by focusing on the balanced and harmonious view of tragically opposed wills that makes the play so moving. Unlike the traditionally gentle and pious protagonist opposed to a brutal and villainous Creon, Braun's Antigone emerges as a true Sophoclean heroine--with all the harshness and even hubris, as well as pathos and beauty, that Sophoclean heroism requires. Braun also reveals a Creon as stubbornly "principled" as Antigone, instead of simply the arrogant tyrant of conventional interpretations.

About the Translator: Richard Emil Braun is Professor of Classics at the University of Alberta in Edmonton. He has published several volumes of poetry and translations, including Children Passing, The Foreclosure, and Persius' Satires.