Leader of the Band: The Life of Woody Herman (Paperback) 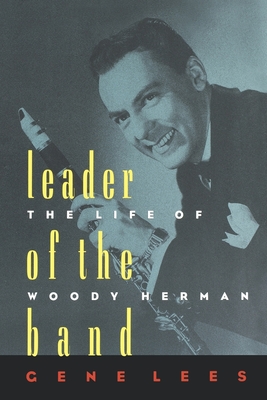 Leader of the Band: The Life of Woody Herman (Paperback)


Not On Our Shelves—Ships in 1-5 Days
(This book cannot be returned.)
Few people know jazz as well as Gene Lees. As a musician, songwriter, former editor of Down Beat, and creator of the acclaimed Jazzletter, he has steeped himself in the music for decades. And no one writes about jazz better than Lees. He is widely acknowledged to be one of the leading jazz historians. The Washington Post called him one of those writers who's a joy to read on any subject at all. No less than Dizzy Gillespie has called Lees the glowing jewel of jazz for his perceptive writing about the music. Now comes the book that jazz lovers (and Lees's fans) have been waiting for--Leader of the Band, a vivid, full-scale biography of Woody Herman.
Asked by Herman in 1986 to write his biography, Gene Lees has spent close to a decade working on it, interviewing many of Herman's childhood friends and lifelong acquaintances as well as numerous musicians, including Les Brown, Milt Jackson, Peggy Lee, Tony Martin, and Red Norvo. The result is a strikingly immediate and well informed portrait of one of the great figures in jazz history--a musical giant whose career spanned the big band and bebop eras. Lees unfolds Herman's dramatic life from his childhood in Milwaukee to his final tragic days hounded by the IRS. We follow his rise to prominence in the 1930s as leader of the band that plays the blues, when he quickly earned the love and respect of his peers that became the enduring hallmark of his career. Lees illuminates Herman's great success between 1945 and 1950, when bebop rapidly developed, revealing how Herman successfully made the transition with bands that became famous as Herman's First Herd and Second Herd. (The Second Herd in particular won a stellar place in the annals of bebop, boasting many brilliant musicians, most notably, tenor saxophonist Stan Getz.) Lees also captures the ultimate tragedy that broke Herman's career--when Herman's manager diverted the band's withholding tax to settle gambling debts. Herman was tormented by the IRS for decades, until he died, penniless, in 1987. Along the way, Lees brings to life the weary routine of performing on the road, with its constant one-night engagements and unending travel, broken only by brief stays at home and moments of camaraderie. And perhaps most important, we not only see Herman's legion of friends and admirers, we see why this commanding figure was so loved and respected, even by that fractious bunch who make their living by playing jazz.
Woody Herman played a central role in the development of jazz--and he played it, as he did the music, with dignity and breathtaking ability. In Leader of the Band, one of our finest writers captures the life of this great bandleader, vividly portraying the triumph and tragedy of a life in jazz.

Gene Lees is the author of many books on jazz and popular music, including Singers and the Song, Meet Me at Jim and Andy's, Waiting for Dizzy, and Cats of Any Color. He was formerly an editor of Down Beat, and is the publisher of Jazzletter (P.O. Box 240, Ojai, California 93024-0240).