The New Buddhism: The Western Tranformation of an Ancient Tradition (Hardcover) 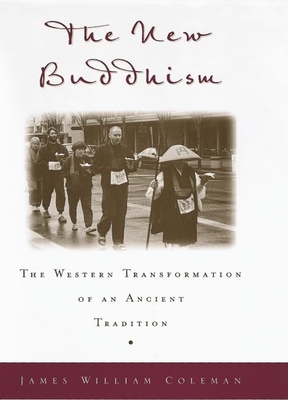 The New Buddhism: The Western Tranformation of an Ancient Tradition (Hardcover)


Special Order—Subject to Availability
In our multicultural society, faiths formerly seen as exotic have become attractive alternatives for many people seeking more satisfying spiritual lives. This is especially true of Buddhism, which is the focus of constant media attention--thanks at least in part to celebrity converts, major motion pictures, and the popularity of the Dalai Lama. Following this recent trend in the West, author James Coleman argues that a new and radically different form of this ancient faith is emerging.
The New Buddhism sheds new light on this recent evolution of Buddhist practice in the West. After briefly recounting the beginnings and spread of Buddhism in the East, Coleman chronicles its reinterpretation by key Western teachers in the nineteenth and twentieth centuries, ranging from the British poet Sir Edwin Arnold to the Beat writer Alan Watts. Turning to the contemporary scene, he finds that Western teachers have borrowed liberally from different Buddhist traditions that never intersect in their original contexts. Men and women practice together as equals; ceremonies and rituals are simpler, more direct, and not believed to have magical effects. Moreover, the new Buddhism has made the path of meditation and spiritual awakening available to everyone, not just an elite cadre of monks. Drawing on interviews with noted teachers and lay practitioners, as well as a survey completed by members of seven North American Buddhist centers, Coleman depicts the colorful variety of new Buddhists today, from dilettantes to devoted students and the dedicated teachers who guide their spiritual progress. He also details the problems that have arisen because of some Western influences--especially with regard to gender roles, sex, and power.
Exploring the appeal of this exotic faith in postmodern society and questioning its future in a global consumer culture, The New Buddhism provides a thorough and fascinating guide to Western Buddhism today.

James William Coleman is Professor of Sociology at the California Polytechnic State University, San Luis Obispo. A graduate of the University of California, Santa Barbara with a specialization in the sociology of religion, he has been a practicing Buddhist for the last 15 years.