Growing Up with Jazz: Twenty-Four Musicians Talk about Their Lives and Careers (Hardcover) 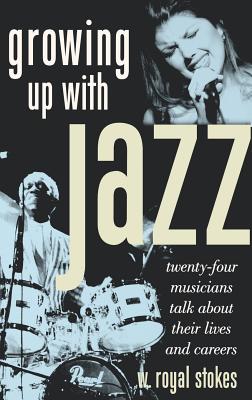 Growing Up with Jazz: Twenty-Four Musicians Talk about Their Lives and Careers (Hardcover)


Not On Our Shelves—Ships in 1-5 Days
(This book cannot be returned.)
A jazz writer for three decades, W. Royal Stokes has a special talent for capturing the initial spark that launches a musician's career. In Growing Up With Jazz, he has interviewed twenty-four instrumentalists and singers who talk candidly about the early influences that started them on the road to jazz and where that road has taken them.
Stokes offers a kaleidoscopic look at the jazz scene, featuring musicians from a dazzling array of backgrounds. Ray Gelato recalls the life of a working class youth in London, Patrizia Scascitelli recounts being a child prodigy in Rome who became the first woman of Italian jazz, and Billy Taylor tells about his childhood in Washington, DC, where his grandfather was a Baptist minister and his father a dentist--and everyone in the family seemed well trained in music. Perhaps most exotic is Luluk Purwanto, an Indonesian violinist who as a child listened to gamelan music in the morning and took violin lessons in the afternoon (on an instrument so expensive she didn't dare quit). For some, the flame burned bright at an early age. Jane Monheit sang before she could speak and was set on a musical career by age eight. Lisa Sokolov played classical piano, sang opera and choral music, and was in a jazz band--all by high school. But Carol Sudhalter, though born into a very musical family (a Bix Beiderbecke family), was a botany major at Smith, and only became a serious musician after college, quitting a government job to study the flute and saxophone in Italy.
From Art Blakey to Claire Daly to Don Byron, here are the compelling stories of two dozen top musicians finding their way in the world of jazz.

W. Royal Stokes has written about jazz and blues for such publications as Down Beat, JazzTimes, and The Washington Post and hosted the public radio shows I Thought I Heard Buddy Bolden Say and Since Minton's. He is the former editor of Jazz Notes, the quarterly journal of the Jazz Journalists Association, and author of The Jazz Scene, Swing Era New York, and Living the Jazz Life. He lives in Elkins, West Virginia.