In Defense of Globalization: With a New Afterword (Paperback) 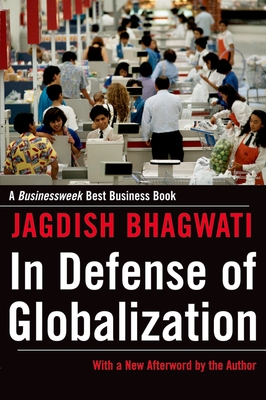 In Defense of Globalization: With a New Afterword (Paperback)


Not On Our Shelves—Ships in 1-5 Days
(This book cannot be returned.)
In the passionate debate that currently rages over globalization, critics have been heard blaming it for a host of ills afflicting poorer nations, everything from child labor to environmental degradation and cultural homogenization. Now Jagdish Bhagwati, the internationally renowned economist, takes on the critics, revealing that globalization, when properly governed, is in fact the most powerful force for social good in the world today. Drawing on his unparalleled knowledge of international and development economics, Bhagwati explains why the "gotcha" examples of the critics are often not as compelling as they seem. With the wit and wisdom for which he is renowned, Bhagwati convincingly shows that globalization is part of the solution, not part of the problem. This edition features a new afterword by the author, in which he counters recent writings by prominent journalist Thomas Friedman and the Nobel Laureate economist Paul Samuelson and argues that current anxieties about the economic implications of globalization are just as unfounded as were the concerns about its social effects.

Jagdish Bhagwati is University Professor at Columbia University and Senior Fellow in International Economics at the Council on Foreign Relations. He writes frequently for The New York Times, The Wall Street Journal, and The Financial Times and is the author of Free Trade Today, The Wind of the Hundred Days: How Washington Mismanaged Globalization, and A Stream of Windows: Unsettling Reflections on Trade, Immigration, and Democracy. He lives in New York City.