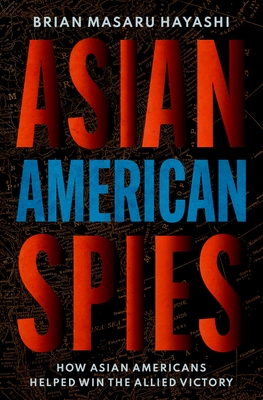 
In Stock—Click for Locations
A recovery of the vital role Chinese, Japanese, and Korean Americans played in US intelligence services in Asia during World War II. Spies deep behind enemy lines; double agents; a Chinese American James Bond; black propaganda radio broadcasters; guerrilla fighters; pirates; smugglers; prostitutes and dancers as spies; and Asian Americans collaborating with Axis Powers. All these colorful individuals form the story of Asian Americans in the Office of Strategic Services (OSS), the forerunner of today's CIA. Brian Masaru Hayashi brings to light for the first time the role played by Chinese, Japanese, and Korean Americans in America's first centralized intelligence agency in its fight against the Imperial Japanese forces in east Asia during World War II. They served deep behind enemy lines gathering intelligence for American and Chinese troops locked in a desperate struggle against Imperial Japanese forces on the Asian continent. Other Asian Americans produced and disseminated statements by bogus peace groups inside the Japanese empire to weaken the fighting resolve of the Japanese. Still others served with guerrilla forces attacking enemy supply and communication lines behind enemy lines. Engaged in this deadly conflict, these Asian Americans agents encountered pirates, smugglers, prostitutes, and dancers serving as the enemy's spies, all the while being subverted from within the OSS by a double agent and without by co-ethnic collaborators in wartime Shanghai. Drawing on recently declassified documents, Asian American Spies challenges the romanticized and stereotyped image of these Chinese, Japanese, and Korean American agents--the Model Minority-while offering a fresh perspective on the Allied victory in the Pacific Theater of World War II.

Brian Masaru Hayashi is a Professor of History at Kent State University. He is the author of For the Sake of Our Japanese Brethren: Assimilation, Nationalism, and Protestantism Among the Japanese of Los Angeles, 1895-1942 and Democratizing the Enemy: The Japanese American Internment.