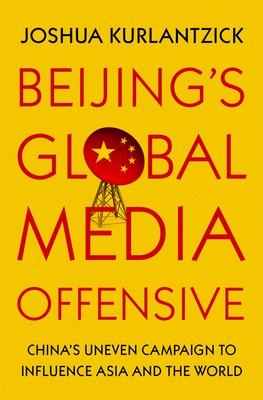 
On Our Shelves Now at:
A major analysis of how China is attempting to become a media and information superpower around the world, seeking to shape the politics, local media, and information environments of both East Asia and the World. Since China's ascendancy toward major-power status began in the 1990s, many observers have focused on its economic growth and expanding military. China's ability was limited in projecting power over information and media and the infrastructure through which information flows. That has begun to change. Beijing's state-backed media, which once seemed incapable having a significant effect globally, has been overhauled and expanded. At a time when many democracies' media outlets are consolidating due to financial pressures, China's biggest state media outlets, like the newswire Xinhua, are modernizing, professionalizing, and expanding in attempt to reach an international audience. Overseas, Beijing also attempts to impact local media, civil society, and politics by having Chinese firms or individuals with close links buy up local media outlets, by signing content-sharing deals with local media, by expanding China's social media giants, and by controlling the wireless and wired technology
through which information now flows, among other efforts. In Beijing's Global Media Offensive--a major analysis of how China is attempting to build a media and information superpower around the world, and how this media power integrates with other forms of Chinese influence--Joshua Kurlantzick focuses on how all of this is playing out in both China's immediate neighborhood--Southeast Asia, Taiwan, Australia, and New Zealand--and also in the United States and many other parts of the world. He traces the ways in which China is trying to build an information and influence superpower, but also critically examines the new conventional wisdom that Beijing has enjoyed great success with these efforts. While China has worked hard to build a global media and information superpower, it often has failed to reap gains from its efforts, and has undermined itself with overly assertive, alienating diplomacy. Still, Kurlantzick contends, China's media, information and political influence campaigns will continue to expand and adapt, helping Beijing exports
its political model and protect the ruling Party, and potentially damaging press freedoms, human rights, and democracy abroad. An authoritative account of how this sophisticated and multi-pronged campaign is unfolding, Beijing's Global Media Offensive provides a new window into China's attempts to make itself an information superpower.

Joshua Kurlantzick is a Senior Fellow for Southeast Asia at the Council on Foreign Relations (CFR). Kurlantzick was previously a visiting scholar at the Carnegie Endowment for International Peace, where he studied Southeast Asian politics and economics and China's relations with Southeast Asia, including Chinese investment, aid, and diplomacy. He is the author of five previous books on China and Southeast Asia.