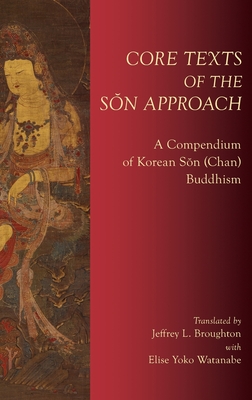 
Not On Our Shelves—Ships in 1-5 Days
Jeffrey L. Broughton here offers a study and partial translation of Core Texts of the Sŏn Approach (Sŏnmun ch'waryo), an anthology of texts foundational to Korean Sŏn (Chan/Zen) Buddhism. Core Texts of the Sŏn Approach provides a convenient entr e to two fundamental themes of Korean Sŏn: Sŏn vis- -vis the doctrinal teachings of Buddhism (in which Sŏn is shown to be superior) and the huatou (i.e., phrase; Korean hwadu) method of practice-work originally popularized by the Song dynasty Chinese Chan master Dahui Zonggao. This method consists of raising to awareness or keeping an eye on the phrase, usually No (Korean mu). No mental operation whatsoever is to be performed upon the phrase. One lifts the phrase to awareness constantly, when doing quiet cross-legged sitting as well as when immersed in the noisiness of everyday life. Core Texts of the Sŏn Approach, which was published in Korea during the first decade of the twentieth century (the identi
known for certain), contains eight Chan texts by Chinese authors (two translated here) and seven Sŏn texts by Korean authors (three translated here), showing the organic relationship between the parent Chinese tradition and its Korean inheritor. The set of translations in this volume will give readers access to some of the key texts of the Korean branch of this influential East Asian school of Buddhism.