The Women Are Up to Something: How Elizabeth Anscombe, Philippa Foot, Mary Midgley, and Iris Murdoch Revolutionized Ethics (Hardcover) 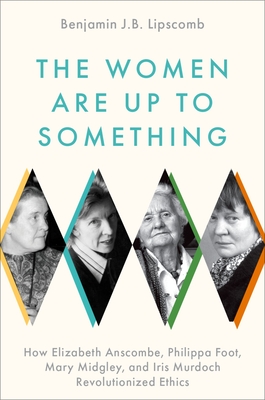 The Women Are Up to Something: How Elizabeth Anscombe, Philippa Foot, Mary Midgley, and Iris Murdoch Revolutionized Ethics (Hardcover)

By Benjamin J. B. Lipscomb


On Our Shelves Now at:
The story of four remarkable women who shaped the intellectual history of the 20th century: Elizabeth Anscombe, Philippa Foot, Mary Midgley, and Iris Murdoch. On the cusp of the Second World War, four women went to Oxford to begin their studies: a fiercely brilliant Catholic convert; a daughter of privilege longing to escape her stifling upbringing; an ardent Communist and aspiring novelist with a list of would-be lovers as long as her arm; and a quiet, messy lover of newts and mice who would become a great public intellectual of our time. They became lifelong friends. At the time, only a handful of women had ever made lives in philosophy. But when Oxford's men were drafted in the war, everything changed. As Elizabeth Anscombe, Philippa Foot, Mary Midgley, and Iris Murdoch labored to make a place for themselves in a male-dominated world, as they made friendships and families, and as they drifted toward and away from each other, they never stopped insisting that some lives are better than others. They argued that courage and discernment and justice--and love--are the heart of a good life. This book presents the first sustained engagement with these women's contributions: with the critique and the alternative they framed. Drawing on a cluster of recently opened archives and extensive correspondence and interviews with those who knew them best, Benjamin Lipscomb traces the lives and ideas of four friends who gave us a better way to think about ethics, and ourselves.

Benjamin J. B. Lipscomb is Professor of Philosophy and Director of the Honors Program at Houghton College. He lives with his family in Fillmore, New York, when his teaching doesn't call him to London for a season.