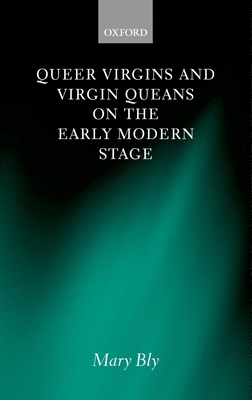 
Special Order—Subject to Availability
(This book cannot be returned.)
Queer Virgins and Virgin Queans looks at the early modern theater through the lens of obscure and obscene puns--especially "queer" puns, those that carry homoerotic resonances and speak to homoerotic desires. In particular, it resurrects the operations of a small boys' company known as the first Whitefriars, which performed for about nine months in 1607-8. As a group, the plays performed by this company exhibit an unusually dense array of bawdy puns, whose eroticism is extremely interesting, given that the focus of eros is the male body. The laughter recoverable from Whitefriars plays harnesses the pun's inherent doubleness to homoerotic pleasure; in these plays, 'the bawdy hand of the dial' is always 'on the pricke of noone'. Mary Bly's analysis depends on the nature of punning itself, and the inflections of language and the creativity that marked Whitefriars punsters, with special emphasis on the effect of puns on an audience. What happens to audience members who sit shoulder to shoulder and laugh at homoerotic quibbles? What is the effect of catching a queer pun's double meaning in a group rather than while alone? How can we characterize those auditors, within the convoluted, if fascinating, theories of erotic identity offered by queer theorists?