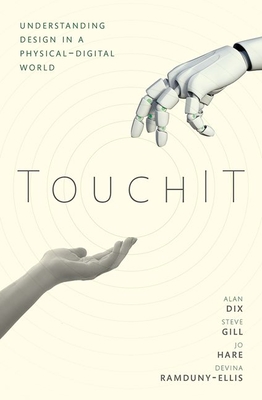 
Not On Our Shelves—Ships in 1-5 Days
Digital technology is fundamentally altering the world we live in, but can only be truly understood in relation to the physical world we all inhabit. The most successful future products and policies will be those that take this rich digital/physical ecology seriously. The physical world is increasingly filled with digital products to the extent that the boundaries of digital and physical reality become blurred. From mundane devices such as mobile phones and washing machines, to esoteric research including tangible computation and body implants, we continually bridge two worlds literally touching buttons and dials and simultaneously interacting with the digital systems that lie behind them. The connection between pure thought and abstract information is through solid keyboard and mouse; but likewise the material world of buildings, cars and running shoes is suffused with computation through sensors, displays and flashing LEDs. How do people understand this world and how can designers create usable hybrid physical-digital products? TouchIT brings together insights from human-computer interaction and industrial design, exploring these themes under four main headings: human body and mind; objects and things; space; and information and computation. In considering each, the authors look into the underlying physical processes, our human understanding of them, and then the way these inform and are informed by digital design. The end draws together the theoretical and practical implications of this for design, including practical advice, potential tools, and philosophical underpinnings.

Alan Dix, Professor and Director and Director, Computational Foundry, Computer Science Swansea University, Wales, UK, Steve Gill, Professor and Deputy Director of Research & Graduate Studies, Cardiff School of Art and Design, Cardiff Metropolitan University, Wales, UK, Devina Ramduny-Ellis, Director of Education and Head of Computer Science, Huddersfield Grammar School, UK, Jo Hare, Senior Lecturer, FET- Architecture and the Built Environment, University of the West of England, UK Alan Dix is a Professor and Director of the Computational Foundry at Swansea University, Wales, UK, a research centre built on the belief that addressing human needs and human values requires and inspires the deepest forms of fundamental science. Previously he spent 10 years in a mix of academic and commercial roles. Alan has worked in human-computer interaction research since the mid 1980s and is a member of the ACM SIGCHI Academy. He is the author of one of the major international textbooks on HCI as well as numerous research publications from formal methods to design creativity, including some of the earliest papers in the HCI literature on topics such as privacy, mobile interaction, and gender and ethnic bias in intelligent algorithms. Steve Gill is Director of Research and Professor of Interactive Product Design at Cardiff Metropolitan University, Wales, UK. He has around 80 publications including 3 patents, but 'Touch-IT' is his first book. While he has been an academic for well over two decades, Steve is, was and will always be an industrial designer at heart and his approach to academic research betrays that basic fact. Like all industrial designers Steve works across disciplines to deliver new approaches, which is essentially how he met Alan. He has a long-standing interest in applied human-centred design approaches with physicality at their core. In recent years these have led to collaborations with computer scientists, engineers, artists, architects and medics, resulting in involvement in projects as diverse as ultra-low cost trauma packs for sub-Saharan Africa and next generation VR. Devina Ramduny-Ellis is Director of Education and Head of Computer Science at Huddersfield Grammar School, UK. She is a computer scientist who worked for many years in Higher Education before moving to the secondary sector. As a researcher, she worked on multidisciplinary projects, with academic and industrial collaborators, covering a breadth of areas. She was actively involved in the research community and has a number of refereed publications for major conferences, journals and book chapters. For the past four years she taught Computer science to Key Stage 5 students at Greenhead College with great success by applying her own subject knowledge, problem-solving techniques and consulting existing analysis and research. Jo Hare is a Senior Lecturer and Programme Leader for the BA in Product Design at UWE, Bristol. The collaboration culminating in this book has provided the foundations of her academic career, having first met Steve, Alan and Devina as the Research Assistant for the Designing for Physicality project (DEPtH). Like Steve, human-centred design is at the core of Jo's work; starting with the use of ultra-low fidelity prototypes to understand user needs which led her to focus on human centred design research methods for the earliest stages of the design process. Service Design and Design Thinking now forms the basis of Jo's teaching and applied research, establishing the role real people play in the success of innovations, fostering a 'making things tangible' approach and applying creativity to complex projects.