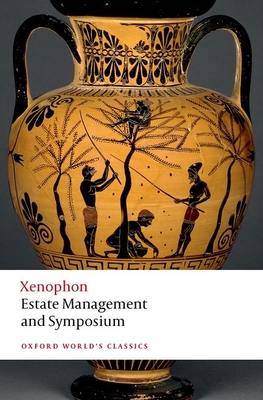 
In Stock—Click for Locations
(This book cannot be returned.)
Xenophon was acknowledged in Antiquity as a philosopher, a historian (third in the triad of great Classical historians, alongside Herodotus and Thucydides), and a literary artist. His narrative was appreciated for its literary qualities including its charm, wit, vigour, and sweetness (for
which he was hailed as 'Attic Muse': Diogenes Laertius, 2.6.57). The Oeconomicus describes Socrates conversing on the topic of successful management of one's oikos (household, estate). The focus is a well-to-do Athenian household, which proves a testing ground for the moral qualities or 'gentlemanliness' of the male head of household, but also a space in which
the role and agency of women turns out to be key. Symposium shifts to the male space of the men's quarters of the private home, to describe an evening of conversation and entertainment at the house of an Athenian plutocrat. Far from being simply a lighthearted affair, the conversation probes
timeless questions regarding wisdom, love, and female capacity, and over it looms the deadly serious matter of Socrates' trial and death. Both works are rich sources for Athenian social history of the Classical period. Oeconomicus in particular offers insights on the role and status of women in Ancient Athens. Xenophon doesn't, however, passively reflect the social realities he saw around him or supply snapshots of historical
actuality.

Xenophon, , Emily Baragwanath, Associate Professor of Classics, University of North Carolina Anthony Verity is a classical scholar and educationalist whose appointments include Head of Classics at Bristol Grammar School, Headmaster of Leeds Grammar School, and Master of Dulwich College from 1986 to 1995. His translations for Oxford World's Classics include Theocritus, Idylls, Pindar, TheComplete Odes, and Homer's Iliad. Emily Baragwanath is Associate Professor of Classics at the University of North Carolina at Chapel Hill. Her main area of scholarly interest is the literary techniques employed by Greek historians in their construction of historical narratives. Her book Motivation and Narrative in Herodotus (OxfordUniversity Press, 2008) was the winner of Oxford's Conington Prize and the CAMWS Award for Outstanding Publication 2010.