British Literature and the Life of Institutions: Speculative States (Hardcover) 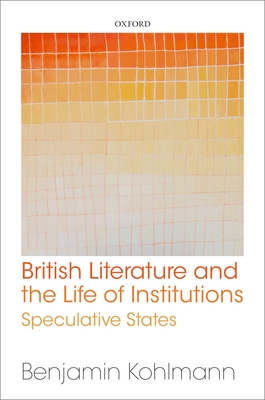 British Literature and the Life of Institutions: Speculative States (Hardcover)


Not On Our Shelves—Ships in 1-5 Days
British Literature and the Life of Institutions charts a literary prehistory of the welfare state in Britain around 1900, but it also marks a major intervention in current theoretical debates about critique and the dialectical imagination. By placing literary studies in dialogue with political
theory, philosophy, and the history of ideas, the book reclaims a substantive reformist language that we have ignored to our own loss. This reformist idiom made it possible to imagine the state as a speculative and aspirational idea--as a fully realized form of life rather than as an uninspiring
ensemble of administrative procedures and bureaucratic processes. This volume traces the resonances of this idiom from the Victorian period to modernism, ranging from Mary Augusta Ward, George Gissing, and H. G. Wells, to Edward Carpenter, E. M. Forster, and Virginia Woolf. Compared to this
reformist language, the economism that dominates current debates about the welfare state signals an impoverishment that is at once intellectual, cultural, and political. Critiquing the shortcomings of the welfare state comes naturally to us, but we often struggle to offer up convincing defences of
its principles and aims. This book intervenes in these debates by urging a richer understanding of critique: if we want to defend the state, Kohlmann argues, we need to learn to think about it again.

Benjamin Kohlmann, Professor, English Department, University of Regensburg Benjamin Kohlmann teaches English literature at the University of Regensburg. His first monograph, Committed Styles: Modernism, Politics, and Left-Wing Literature in the 1930s, was published by Oxford University Press in 2014. With Matthew Taunton he is co-editor of A History of 1930s BritishLiterature (CUP, 2019), and his articles have been published in PMLA, ELH, Modern Fiction Studies, Novel, and other journals.