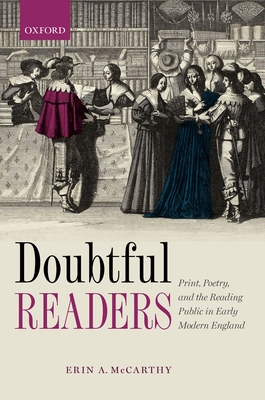 By Erin A. McCarthy


Not On Our Shelves—Ships in 1-5 Days
When poetry was printed, poets and their publishers could no longer take for granted that readers would have the necessary knowledge and skill to read it well. By making poems available to anyone who either had the means to a buy a book or knew someone who did, print publication radically expanded the early modern reading public. These new readers, publishers feared, might not buy or like the books. Worse, their misreadings could put the authors, the publishers, or the readers themselves at risk. Doubtful Readers: Print, Poetry, and the Reading Public in Early Modern England focuses on early modern publishers' efforts to identify and accommodate new readers of verse that had previously been restricted to particular social networks in manuscript. Focusing on the period between the maturing of the market for printed English literature in the 1590s and the emergence of the professional poet following the Restoration, this study shows that poetry was shaped by--and itself shaped--strong print publication traditions. By reading printed editions of poems by William Shakespeare, Aemilia Lanyer, John Donne, and others, this book shows how publishers negotiated genre, gender, social access, reputation, literary knowledge, and the value of English literature itself. It uses literary, historical, bibliographical, and quantitative evidence to show how publishers' strategies changed over time. Ultimately, Doubtful Readers argues that although--or perhaps because--publishers' interpretive
and editorial efforts are often elided in studies of early modern poetry, their interventions have had an enduring impact on our canons, texts, and literary histories.

Erin A. McCarthy, Lecturer in Digital Humanities, University of Newcastle, Australia Erin A. McCarthy is Lecturer in Digital Humanities at the University of Newcastle, Australia. Her research interests include sixteenth- and seventeenth-century literature, material texts, the history of reading, and women's writing. Previously, she was a postdoctoral researcher on the European Research Council-funded project 'RECIRC: The Reception and Circulation of Early Modern Women's Writing, 1550-1700' at the National University of Ireland, Galway. This research will be the basis of a monograph jointly authored with Marie-Louise Coolahan and Sajed Chowdhury.