Covariant Physics: From Classical Mechanics to General Relativity and Beyond (Paperback) 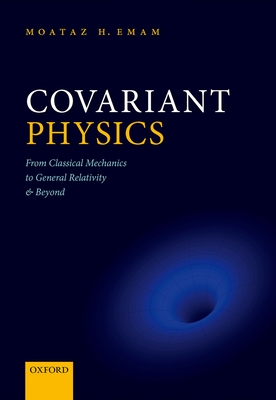 Covariant Physics: From Classical Mechanics to General Relativity and Beyond (Paperback)


Not On Our Shelves—Ships in 1-5 Days
Covariant Physics: From Classical Mechanics to General Relativity and Beyond endeavours to provide undergraduate students as well as self-learners with training in the fundamentals of the modern theories of spacetime, most notably the general theory of relativity as well as physics in curved spacetime backgrounds in general. This text does so with the barest of mathematical preparation. In fact, very little beyond multivariable calculus and a bit of linear algebra is assumed. Throughout this textbook, the main theme tying the various topics is the so-called principle of covariance - a fundamental symmetry of physics that one rarely encounters in undergraduate texts. The material is introduced very gradually, starting with the simplest of high school mathematics, and moving through the more intense notions of tensor calculus, geometry, and differential forms with ease. Familiar notions from classical mechanics and electrodynamics are used to increase familiarity with the advanced mathematical ideas, and to emphasize the unity of all of physics under the single principle of covariance. The mathematical and physical techniques developed in this book should allow students to perform research in various fields of theoretical physics as early as their sophomore year in college. The language the reader will learn in this book is the foundational mathematical language of many modern branches of physics, and as such should allow them to read and generally understand many modern physics papers.

Moataz H. Emam, Professor of Physics, State University of New York College at Cortland Dr Moataz H. Emam is a professor of physics at the State University of New York College at Cortland. He holds a BS in civil engineering, a BS in physics, an MSc in high energy physics from Cairo University, as well as a PhD in theoretical physics from the University of Massachusetts at Amherst. Dr Emam also serves periodically as Visiting/Adjunct Professor of Physics at the Zewail City for Science and Technology in Egypt. Teaching and research are Dr Emam's main passions. In his spare time, he maintains a popular science blog in Arabic.