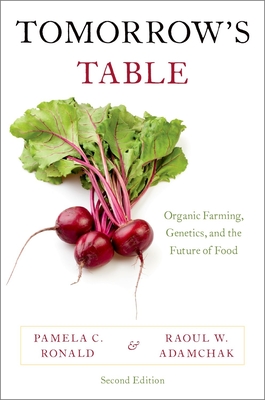 
Not On Our Shelves—Ships in 1-5 Days
"Tomorrow's Table" argues that a judicious blend of two important strands of agriculture--genetic engineering and organic farming--is key to helping feed the world's growing population in an ecologically balanced manner. Pamela Ronald, a geneticist, and her husband, Raoul Adamchak, an organic farmer, take the reader inside their lives for roughly a year, allowing us to look over their shoulders so that we can see what geneticists and organic farmers actually do. Readers see the problems that farmers face, trying to provide larger yields without resorting to expensive or environmentally hazardous chemicals--a problem that will loom larger and larger as the century progresses--and they learn how organic farmers and geneticists address these problems. The book is for consumers, farmers, and policy decision makers who want to make food choices and policy that will support ecologically responsible farming practices, and for anyone who wants accurate information about organic farming,
genetic engineering, and their potential impacts on human health and the environment. The first edition was published in hardcover in 2008 and in paperback in 2009. This second edition reflects the many and varied changes the fields of farming and genetic engineering have seen since 2009. It includes a new preface and three new chapters-one on politics and food-related protests such as the Marin county anti-vaccine movement and the subsequent outbreak of whooping cough, one on farming and food security, and one containing various recipes. Existing chapters on the tools of genetic engineering, organic vs. conventional foods, the tools of organic agriculture, and food labeling and legislature have all been updated.

Pamela C. Ronald is a Distinguished Professor in the Department of Plant Pathology and the Genome Center at the University of California, Davis. Raoul W. Adamchak has grown organic crops for thirty years. He farms and teaches at the certified organic Market Garden at the University of California, Davis Student Farm. Raoul has received the UC Davis 2020 Sustainability Champion Award for Environmental Excellence.