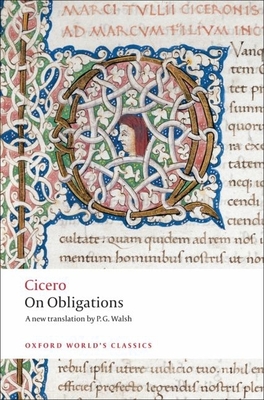 
Not On Our Shelves—Ships in 1-5 Days
Cicero wrote On Obligations (De Officiis) in late 44 BC after the assassination of Julius Caesar to provide principles of behavior for aspiring politicians. It has subsequently played a seminal role in the formation of ethical values in western Christendom. Adopted by the fourth-century Christian humanists, it became transmuted into the moral code of the high Middle Ages. Thereafter, in the Renaissance from the time of Petrarch, and in the Age of Enlightenment that followed, it was given central prominence in discussion of the government of states. Today, when corruption and conflict in political life are the focus of so much public attention, On Obligations is still the foremost guide to good conduct. This new edition is based on a more systematic examination of the vast manuscript tradition than has previously been attempted, and shows with new clarity the major contribution to the improvement of the text made by scribes and readers of the later manuscripts, both in the
Middle Ages and in the Renaissance. About the Series: For over 100 years Oxford World's Classics has made available the broadest spectrum of literature from around the globe. Each affordable volume reflects Oxford's commitment to scholarship, providing the most accurate text plus a wealth of other valuable features, including expert introductions by leading authorities, voluminous notes to clarify the text, up-to-date bibliographies for further study, and much more.

P. G. Walsh has translated four previous classical works for OWC: Apuleius, The Golden Ass; Petronius, Satyricon; Boethius, The Consolation of Philosophy; and Cicero, The Nature of the Gods