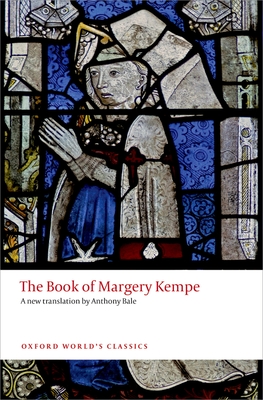 
Not On Our Shelves—Ships in 1-5 Days
"Alas that I ever did sin It is so merry in Heaven " The Book of Margery Kempe (c. 1436-8) is the extraordinary account of a medieval wife, mother, and mystic. Known as the earliest autobiography written in the English language, Kempe's Book describes the dramatic transformation of its heroine from failed businesswoman and lustful young wife, to devout and chaste pilgrim. She vividly describes her prayers and visions, as well as the temptations in daily life to which she succumbed before dedicating herself to her spiritual calling. She travelled to the most holy sites of the medieval world, including Rome and Jerusalem. In her life and her boisterous devotion, Kempe antagonized many of those around her; yet she also garnered friends and supporters who helped to record her experiences. Her Book opens a window to the medieval world, and provides a fascinating portrait of one woman's life, aspirations, and prayers. This new translation preserves the forceful narrative voice of Kempe's Book and includes a wide-ranging introduction and useful notes. ABOUT THE SERIES:
For over 100 years Oxford World's Classics has made available the widest range of literature from around the globe. Each affordable volume reflects Oxford's commitment to scholarship, providing the most accurate text plus a wealth of other valuable features, including expert introductions by leading authorities, helpful notes to clarify the text, up-to-date bibliographies for further study, and much more.

Anthony Bale studies at the universities of Oxford and York and at the Hebrew University of Jerusalem. He has published widely on various medieval topics, including Christian-Jewish relations, the poetry of Chaucer and Lydgate, religion in East Anglia, and fifteenth-century literature and pilgrimage. He is the editor of Mandeville's Book of Marvels and Travels from Oxford World's Classics, and in 2011 was awarded the Philip Leverhulme Prize.