Civil Resistance and Power Politics: The Experience of Non-Violent Action from Gandhi to the Present (Paperback) 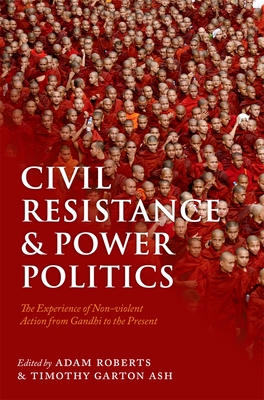 Civil Resistance and Power Politics: The Experience of Non-Violent Action from Gandhi to the Present (Paperback)


Special Order—Subject to Availability
This widely-praised book identified peaceful struggle as a key phenomenon in international politics a year before the revolutions in Tunisia and Egypt confirmed its central argument. Civil resistance--non-violent action against such challenges as dictatorial rule, racial discrimination and foreign military occupation--is a significant but inadequately understood feature of world politics. Especially through the peaceful revolutions of 1989, and the developments in the Arab world since December 2010, it has helped to shape the world we live in. Civil Resistance and Power Politics covers most of the leading cases, including the actions master-minded by Gandhi, the US civil rights struggle in the 1960s, the Islamic revolution in Iran in 1979, the 'people power' revolt in the Philippines in the 1980s, the campaigns against apartheid in South Africa, the various movements contributing to the collapse of the Soviet Bloc in 1989-91, and, in this century, the 'colour revolutions' in Georgia and Ukraine. The chapters, written by leading experts, are richly descriptive and analytically rigorous. This book addresses the complex interrelationship between civil resistance and other dimensions of power. It explores the question of whether civil resistance should be seen as potentially replacing violence completely, or as a phenomenon that operates in conjunction with, and modification of, power politics. It looks at cases where campaigns were repressed, including China in 1989 and Burma in 2007. It notes that in several instances, including Northern Ireland, Kosovo and Georgia, civil resistance movements were followed by the outbreak of armed conflict. It also includes a chapter with new material from Russian archives showing how the Soviet leadership responded to civil resistance, and a comprehensive bibliographical essay. Illustrated throughout with a remarkable selection of photographs, this uniquely wide-ranging and path-breaking study is written in an accessible style and is intended for the general reader as well as for students of Modern History, Politics, Sociology and International Relations.

Sir Adam Roberts is President of the British Academy, Senior Research Fellow of Politics and International Relations at Oxford University, and Emeritus Fellow of Balliol College, Oxford University. His main academic interests are in the fields of international security, international organizations, and international law (including the laws of war). He has also worked extensively on the role of civil resistance against dictatorial regimes and foreign rule, and on the history of thought about international relations. Professor Robert's is the co-editor of The United Nations Security Council and War (OUP 2008), Documents on the Laws of War (OUP 2000), and Hugo Grotius and International Relations (OUP 1992). Timothy Garton Ash is Professor of European Studies at Oxford University, Isaiah Berlin Professorial Fellow at St Antony's College, Oxford University, and a Senior Fellow at the Hoover Institution, Stanford University. He is the author of eight books of political writing or 'history of the present' which have charted the transformation of Europe over the last quarter-century. His essays appear regularly in the New York Review of Books and he writes a weekly column in the Guardian which is widely syndicated in Europe, Asia and the Americas. Throughout the nineteen eighties, he reported and analyzed the emancipation of Central Europe from communism in contributions to the New York Review of Books, the Independent, the Times, and the Spectator.