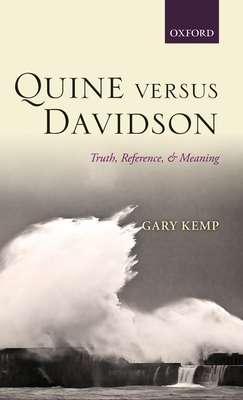 
Not On Our Shelves—Ships in 1-5 Days
(This book cannot be returned.)
Gary Kemp presents a penetrating investigation of key issues in the philosophy of language, by means of a comparative study of two great figures of late twentieth-century philosophy. So far as language and meaning are concerned, Willard Van Orman Quine and Donald Davidson are usually regarded
as birds of a feather. The two disagreed in print on various matters over the years, but fundamentally they seem to be in agreement; most strikingly, Davidson's thought experiment of Radical Interpretation looks to be a more sophisticated, technically polished version of Quinean Radical Translation.
Yet Quine's most basic and general philosophical commitment is to his methodological naturalism, which is ultimately incompatible with Davidson's main commitments. In particular, it is impossible to endorse, from Quine's perspective, the roles played by the concepts of truth and reference in
Davidson's philosophy of language: Davidson's employment of the concept of truth is from Quine's point of view needlessly adventurous, and his use of the concept of reference cannot be divorced from unscientific 'intuition'. From Davidson's point of view, Quine's position looks needlessly
scientistic, and seems blind to the genuine problems of language and meaning. Gary Kemp offers a powerful argument for Quine's position, and in favour of methodological naturalism and its corollary, naturalized epistemology. It is possible to give a consistent and explanatory account of language and
meaning without problematic uses of the concepts truth and reference, which in turn makes a strident naturalism much more plausible.