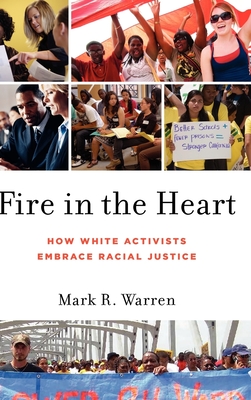 
Not On Our Shelves—Ships in 1-5 Days
(This book cannot be returned.)
Fire in the Heart uncovers the dynamic processes through which some white Americans become activists for racial justice. The book reports powerful accounts of the development of racial awareness drawn from in-depth interviews with fifty white activists in the fields of community organizing, education, and criminal justice reform. Drawing extensively on the rich interview material, Mark Warren shows how white Americans can develop a commitment to racial justice, not just because it is the right thing to do, but because they embrace the cause as their own. Contrary to much contemporary thinking on racial issues focused on altruism or interests, Warren finds that cognitive and rational processes alone do little to move whites to action. Rather, the motivation to take and sustain action for racial justice is profoundly moral and relational. Warren shows how white activists come to find common cause with people of color when their core values are engaged, as they build relationships with people of color that lead to caring, and when they develop a vision of a racially just future that they understand to benefit everyone--themselves, other whites, and people of color. Warren also considers the complex dynamics and dilemmas white people face in working in multiracial organizations committed to systemic change in
America's racial order, and provides a deeper understanding and appreciation of the role that white people can play in efforts to promote racial justice. The first study of its kind, Fire in the Heart brings to light the perspectives of white people who are working day-to-day to build not a post-racial America but the foundations for a truly multiracial America rooted in a caring, human community with equity and justice at its core.

Mark R. Warren is Associate Professor of Education at Harvard University. He is a sociologist and has published widely on community organizing and on efforts to build alliances across race and class to revitalize urban communities, reform public education and expand democracy.