When Did Indians Become Straight?: Kinship, the History of Sexuality, and Native Sovereignty (Hardcover) 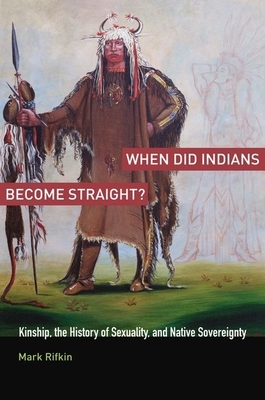 When Did Indians Become Straight?: Kinship, the History of Sexuality, and Native Sovereignty (Hardcover)


Special Order—Subject to Availability
When Did Indians Become Straight? explores the complex relationship between contested U.S. notions of normality and shifting forms of Native American governance and self-representation. Examining a wide range of texts (including captivity narratives, fiction, government documents, and anthropological tracts), Mark Rifkin offers a cultural and literary history of the ways Native peoples have been inserted into Euramerican discourses of sexuality and how Native intellectuals have sought to reaffirm their peoples' sovereignty and self-determination.

Mark Rifkin is Assistant Professor of English at the University of North Carolina at Greensboro. He is the author of Manifesting America: the Imperial Construction of U.S. National Space and the coeditor of Sexuality, Nationality, Indigeneity: Rethinking the State at the Intersection of Native American and Queer Studies.