Like Cats and Dogs: Contesting the Mu Koan in Zen Buddhism (Hardcover) 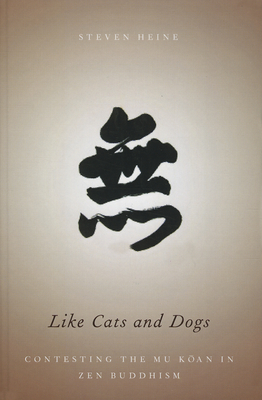 Like Cats and Dogs: Contesting the Mu Koan in Zen Buddhism (Hardcover)


Special Order—Subject to Availability
Koans are dialogues that stand at the center of Zen Buddhist literature and are often used to provoke the great doubt in testing a trainee's progress. The Mu Koan consists of a brief conversation in which a monk asks Master Zhaozhou whether or not a dog has Buddha-nature. According to the
main version, the reply is Mu: literally, No, but implying the philosophical notion of nothingness. This case is widely considered to be the single best- known and most widely circulated koan record of the Zen school that offers existential release from anxiety to attain spiritual illumination. In a careful analysis of the historical and rhetorical basis of the literature, Steven Heine demonstrates that the Mu version of the case, preferred by advocates of the key-phrase approach, does not by any means constitute the final word concerning the meaning and significance of the Mu Koan. He
shows that another canonical version, which gives both Yes and No responses, must be taken into account. Like Cats and Dogs offers critical insight and a new theoretical perspective on the koan of koans.

Steven Heine is an authority on East Asian religion and society, especially the history of Zen Buddhism and its relation to culture in China and Japan. He has published two dozen books.