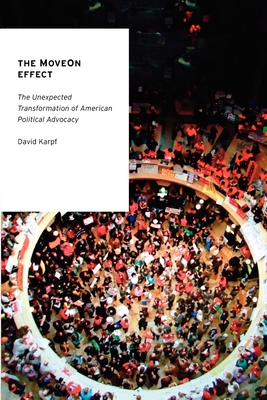 
Not On Our Shelves—Ships in 1-5 Days
(This book cannot be returned.)
The Internet is facilitating a generational transition within America's advocacy group system. New "netroots" political associations have arisen in the past decade and play an increasingly prominent role in citizen political mobilization. At the same time, the organizations that mediate citizen political engagement and sustained collective action are changing. They rely upon modified staff structures and work routines. They employ novel strategies and tactical repertoires. Rather than "organizing without organizations," the new media environment has given rise to "organizing through different organizations."
The MoveOn Effect provides a richly detailed analysis of this disruptive transformation. It highlights changes in membership and fundraising regimes - established industrial patterns of supporter interaction and revenue streams - that were pioneered by MoveOn.org and have spread broadly within the advocacy system. Through interviews, content analysis, and direct observation of the leading netroots organizations, the book offers fresh insights into 21st century political organizing. The book highlights important variations among the new organizations - including internet-mediated issue generalists like MoveOn, community blogs like DailyKos.com, and neo-federated groups like DemocracyforAmerica.com. It also explores a wider set of netroots infrastructure organizations that provide supporting services to membership-based advocacy associations.
The rise of the political netroots has had a distinctly partisan character: conservatives have repeatedly tried and failed to build equivalents to the organizations and infrastructure of the progressive netroots. The MoveOn Effect investigates these efforts, as well as the late-forming Tea Party movement, and introduces the theory of Outparty Innovation Incentives as an explanation for the partisan adoption of political technology.
Written by a political scientist who is also a longtime political organizer, The MoveOn Effect offers a widely-accessible account of the Internet's impact on American politics. Operating at the intersection of practitioner and academic knowledge-traditions, Karpf provides a reassessment of many longstanding claims about new media and citizen political engagement.

David Karpf is Assistant Professor in the Rutgers University School of Communication and Information, as well as a Faculty Associate at the Eagleton Institute of Politics and a Visiting Fellow with the Yale Information Society Project