Talking to Strangers: Anxieties of Citizenship since Brown v. Board of Education (Paperback) 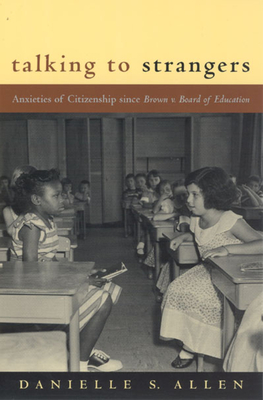 Talking to Strangers: Anxieties of Citizenship since Brown v. Board of Education (Paperback)


Not On Our Shelves—Ships in 1-5 Days
"Don't talk to strangers" is the advice long given to children by parents of all classes and races. Today it has blossomed into a fundamental precept of civic education, reflecting interracial distrust, personal and political alienation, and a profound suspicion of others. In this powerful and eloquent essay, Danielle Allen, a 2002 MacArthur Fellow, takes this maxim back to Little Rock, rooting out the seeds of distrust to replace them with "a citizenship of political friendship."

Returning to the landmark Brown v. Board of Education decision of 1954 and to the famous photograph of Elizabeth Eckford, one of the Little Rock Nine, being cursed by fellow "citizen" Hazel Bryan, Allen argues that we have yet to complete the transition to political friendship that this moment offered. By combining brief readings of philosophers and political theorists with personal reflections on race politics in Chicago, Allen proposes strikingly practical techniques of citizenship. These tools of political friendship, Allen contends, can help us become more trustworthy to others and overcome the fossilized distrust among us.

Sacrifice is the key concept that bridges citizenship and trust, according to Allen. She uncovers the ordinary, daily sacrifices citizens make to keep democracy working—and offers methods for recognizing and reciprocating those sacrifices. Trenchant, incisive, and ultimately hopeful, Talking to Strangers is nothing less than a manifesto for a revitalized democratic citizenry.

Danielle Allen is the James Bryant Conant University Professor at Harvard University, where she is also the principal investigator for the Democratic Knowledge Project. She was a recipient of a MacArthur fellowship in 2001 and was elected to the American Academy of Arts and Sciences in 2009. In 2020, she won the Kluge Prize for Achievement in the Study of Humanity, administered by the Library of Congress, that recognizes work in disciplines not covered by the Nobel Prizes. She is the author or coeditor of many books, including Our Declaration: A Reading of the Declaration of Independence in Defense of Equality.

“Allen understands that democracy originates in the subjective dimension of everyday life, and she focuses on what she calls our ‘habits of citizenship’—the ways we often unconsciously regard and interact with fellow citizens. If democracy resides in ‘the very soul of subjectivity,’ then for Allen subjectivity itself cannot be understood apart from relationships. . . . Borrowing from Aristotle, the solution she proposes is friendship. ‘Only the concept of friendship,’ Allen writes, ‘captures the conjunction of faculties—the orientation toward others, knowledge of the world, developed practices, and psychological effects—that must be activated in democratic citizenship.’”

"The task of this book is to find ways for citizens to trust one another in these unsettled times. Doing so, Allen argues, requires developing habits of political friendship. The challenge of democratic politics, ironically, is to turn strangers into friends. . . . Talking to Strangers is engaging, well written, and tightly argued. Its interpretations of texts are excellent. . . . An important contribution to democratic theory."
— Joel Olson

"It's an important book; best read and discussed with a friend. Don't miss this if you are concerned about the state of democracy, schooling, or our climate of civility."--Deborah Meier
— Deborah Meier