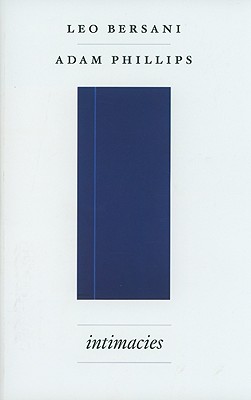 
Not On Our Shelves—Ships in 1-5 Days
Two gifted and highly prolific intellectuals, Leo Bersani and Adam Phillips, here present a fascinating dialogue about the problems and possibilities of human intimacy. Their conversation takes as its point of departure psychoanalysis and its central importance to the modern imagination—though equally important is their shared sense that by misleading us about the importance of self-knowledge and the danger of narcissism, psychoanalysis has failed to realize its most exciting and innovative relational potential.
In pursuit of new forms of intimacy they take up a range of concerns across a variety of contexts. To test the hypothesis that the essence of the analytic exchange is intimate talk without sex, they compare Patrice Leconte’s film about an accountant mistaken for a psychoanalyst, Intimate Strangers, with Henry James’s classic novella The Beast in the Jungle. A discussion of the radical practice of barebacking—unprotected anal sex between gay men—delineates an intimacy that rejects the personal. Even serial killer Jeffrey Dahmer and the Bush administration’s war on terror enter the scene as the conversation turns to the way aggression thrills and gratifies the ego. Finally, in a reading of Socrates’ theory of love from Plato’s Phaedrus, Bersani and Phillips call for a new form of intimacy which they term “impersonal narcissism”: a divestiture of the ego and a recognition of one’s non-psychological potential self in others. This revolutionary way of relating to the world, they contend, could lead to a new human freedom by mitigating the horrifying violence we blithely accept as part of human nature.
Charmingly persuasive and daringly provocative, Intimacies is a rare opportunity to listen in on two brilliant thinkers as they explore new ways of thinking about the human psyche.
Leo Bersani (1931-2022) was professor of French at the University of California, Berkeley, and the author of numerous books.

Adam Phillips is a psychoanalyst, visiting professor in the Department of English at York University, the general editor of Penguin Modern Classics’s Freud translations, and the author of twelve books, including Going Sane and Side Effects.

“In this fascinating and disturbing book, two writers with prose styles and intellectual styles that are at once famously identifiable and intimately personal celebrate the possibility of relationships that defy identity and undo personality. Braiding together brilliant psychoanalytic reflections on fiction and film, on the serial killer Jeffrey Dahmer and the invasion of Iraq, on suicidally unsafe sex and Socrates’ theory of love, Bersani and Phillips at once dream of shattering the ego and, in their own distinct voices, display its miraculous, tragicomic persistence.”

— Stephen Greenblatt, author of Will in the World: How Shakespeare Became Shakespeare

“This tremendous accomplishment showcases the talents of two agile, wonderfully erudite minds. As they weigh our desire for intimacy and explain why it so often fails, Bersani and Phillips grapple with issues as weighty as aggression and state-sanctioned violence. Every facet of the subject is handled with impressive care and intelligence. Intimacies is often lyrical, even occasionally elegiac, but for a book about impersonal narcissism I found it surprisingly poignant, personal, and affecting.”
— Christopher Lane, author of Shyness: How Normal Behavior Became a Sickness

“Intimacies is a very incisive and gentle exchange between two writers who have thought and rethought psychoanalysis in powerful terms for contemporary culture. The dialogue enacts the kind of relationality it seeks to know, moving beyond the traditional narcissism of authorship, probing the important difference between being a psychological subject and finding a way to be present to another person. Psychoanalysis is moved beyond the theory of the ego and developmental norms, returned to primary questions of how and why pleasure is often at odds with self-preservation, and how such enduring tensions are presented in visual media, sexual practice, dialogue, and clinical exchange. Practiced here is an intimacy that explores the regions of impersonal co-existence where losing the self expands the capacity to love. This a beautifully crafted book, one that underscores how the social life of the psyche is a matter of risk, wager, suspense, excitation, bodies, talk, and all manner of things both dangerous and sustaining.”Judith Butler, author of Undoing Gender