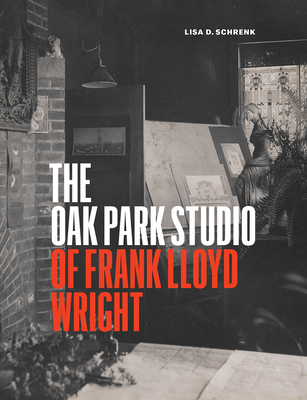 
Not On Our Shelves—Ships in 1-5 Days
Between 1898 and 1909, Frank Lloyd Wright’s residential studio in the idyllic Chicago suburb of Oak Park served as a nontraditional work setting as he matured into a leader in his field and formulized his iconic design ideology. Here, architectural historian Lisa D. Schrenk breaks the myth of Wright as the lone genius and reveals new insights into his early career.

With a rich narrative voice and meticulous detail, Schrenk tracks the practice’s evolution: addressing how the studio fit into the Chicago-area design scene; identifying other architects working there and their contributions; and exploring how the suburban setting and the nearby presence of Wright’s family influenced office life. Built as an addition to his 1889 shingle-style home, Wright’s studio was a core site for the ideological development of the prairie house, one of the first truly American forms of residential architecture. Schrenk documents the educational atmosphere of Wright’s office in the context of his developing design ideology, revealing three phases as he transitioned from colleague to leader. This heavily illustrated book includes a detailed discussion of the physical changes Wright made to the building and how they informed his architectural thinking and educational practices. Schrenk also addresses the later transformations of the building, including into an art center in the 1930s, its restoration in the 1970s and 80s, and its current use as a historic house museum.

Based on significant original and archival research, including interviews with Wright’s family and others involved in the studio and 180 images, The Oak Park Studio of Frank Lloyd Wright offers the first comprehensive look at the early independent office of one of the world’s most influential architects.
Lisa D. Schrenk is associate professor of architectural history at the University of Arizona. She is the author of Building a Century of Progress: The Architecture of Chicago’s 1933–34 World’s Fair and was the education director of the Frank Lloyd Wright Home and Studio Foundation from 1988 to 1992.
"In this magnificent offering, Schrenk takes a remarkably detailed look at Frank Lloyd Wright’s Oak Park Studio in Chicago. . . . Architecture buffs won’t want to miss this extraordinary monograph."
— Publishers Weekly

"An image-rich dissection of the nine years Wright worked from his shaded suburban block, coming into his own within the local design world."
— Chicago Tribune

"Schrenk's ability to synthesize the sociocultural history that swirled around Wright, her astute analyses of the building's ever-changing spaces, and her inclusion of the archaeological evidence of those changes—together with copious visuals that include architectural drawings and prints, historic photographs, and excellent contemporary photographs by James Caulfield—make this an invaluable addition to the Wright corpus."
— Choice Connect

“Schrenk has written an ambitious and meticulously researched book. One of its greatest achievements is the vivid evocation of life within the studio by populating it with Wright and his family members, employees, consultants, and clients. The Oak Park Studio of Frank Lloyd Wright is accessible enough for any general reader yet informative enough for specialists in the field. It is a valuable contribution to the study of Wright’s career.”
— Richard Cleary, University of Texas at Austin

“Schrenk’s comprehensive text not only chronicles and reconstructs the genesis and continuing transformation of Wright’s home and studio in Oak Park, but also equally innovatively identifies the members of the dynamic coterie that worked there. She reveals those talented women and men to have been far more than, as conventional wisdom would have it, mechanistic ‘apprentices to genius.’ Navigating her way through legend, she recognizes the vital role their many hands played in enabling Wright to launch his phenomenal career. Schrenk’s encyclopedic volume is nothing short of an indispensable reference on Wright’s celebrated laboratory, as both an architectural artifact and incubator of modern American architecture.”
— Christopher Vernon, University of Western Australia

“Frank Lloyd Wright said he shook his designs out of his sleeve. In this remarkable and informative new book, Schrenk shows what Wright had up his sleeve at his Oak Park Studio—a talented team of architects, artists, and designers who helped him produce a masterpiece a year.”
— Kevin Harrington, Emeritus, Illinois Institute of Technology

“With beautiful photos, vintage images, original architectural drawings and more, Schrenk explores in depth how Wright came to build his iconic suburban Chicago home and studio and how that led him to his next home and studio project – Taliesen in Spring Green – and the people around him that were involved in both, including family, students, architects and others.”
— OnMilwaukee