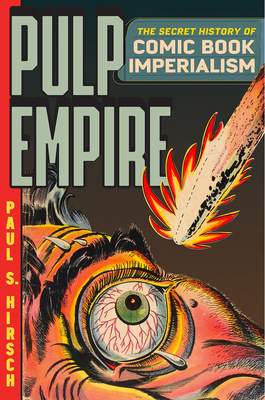 
On Our Shelves Now at:
Winner of the Popular Culture Association's Ray and Pat Browne Award for Best Book in Popular or American Culture

In the 1940s and ’50s, comic books were some of the most popular—and most unfiltered—entertainment in the United States. Publishers sold hundreds of millions of copies a year of violent, racist, and luridly sexual comics to Americans of all ages, until a 1954 Senate investigation led to a censorship code that nearly destroyed the industry. But this was far from the first time the US government actively involved itself with comics—it was simply the most dramatic manifestation of a long, strange relationship between high-level policy makers and a medium that even artists and writers often dismissed as a creative sewer. In Pulp Empire, Paul S. Hirsch uncovers the gripping untold story of how the US government both attacked and appropriated comic books to help wage World War II and the Cold War, promote official—and clandestine—foreign policy, and deflect global critiques of American racism.

As Hirsch details, during World War II—and the concurrent golden age of comic books—government agencies worked directly with comic book publishers to stoke hatred for the Axis powers while simultaneously attempting to dispel racial tensions at home. Later, as the Cold War defense industry ballooned—and as comic book sales reached historic heights—the government again turned to the medium, this time trying to win hearts and minds in the decolonizing world through cartoon propaganda.

Hirsch’s groundbreaking research weaves together a wealth of previously classified material, including secret wartime records, official legislative documents, and caches of personal papers. His book explores the uneasy contradiction of how comics were both vital expressions of American freedom and unsettling glimpses into the national id—scourged and repressed on the one hand and deployed as official propaganda on the other. Pulp Empire is a riveting illumination of underexplored chapters in the histories of comic books, foreign policy, and race.
Paul S. Hirsch is a visiting research affiliate at the Institute for Historical Studies in the Department of History at the University of Texas at Austin. His work has received major support from organizations including the Robert B. Silvers Foundation, the National Science Foundation, and the Library of Congress.
“Vividly illustrated and enjoyably hyperbolic, Pulp Empire tells its tale as a kind of horror comic. . . . Like any self-respecting superhero movie, it deserves a sequel. ”
— J. Hoberman

"Stuart L. Bernath Book Prize, honorable mention.Pulp Empire is a beautiful, unique, and provocative book. Turning to comic books as a revealing source for popular culture and policy in the Cold War, Hirsch captures the nightmares, hopes, and dreams of countless citizens in a nuclear world. In his close analysis, comic books are both projections and promoters of core beliefs about conflict and power. With their reach among diverse readers, the comic books set the discursive boundaries for many discussions about good and evil, as well as strong and weak, in a time of transition for formerly isolationist Americans. Hirsch’s book blends cultural analysis with discussions of gender, race, and nationalism. His book opens many valuable perspectives on the complex sources of Cold War thinking."

"A thought-provoking and perspective altering history of the American comic book as both a cultural and imperial force. . . . Pulp Empire is beautiful and glossy and more than worthy of the visually stunning and often disturbing comics it comments on."
— H-War

"[Pulp Empire] makes a strong contribution to the fields of US imperialism, Cold War popular culture, and the ugly history of racial caricature in comics. It also demonstrates how all histories are global histories if we look outside the panels."
— Pacific Historical Review

"A highly accessible book, carried by wry prose and well-positioned analysis of a lavish selection of comics panels and covers from DC, Timely/Marvel, EC, and others—all in vibrant color. . . . Pulp Empire demonstrates that comics evolved in lockstep with the expansion of the United States and the global communities it helped create."
— Journal of American Culture

“I’ll be frank: I love this book. Hirsch’s writing is crisp and exciting and it’s a joy to see the history of comic books and the Cold War United States told from such a fresh angle. This fun, sharp book is one I’ll be thinking about for a while.”
— Daniel Immerwahr, author of How to Hide an Empire: A History of the Greater United States

“Every so often, a single book changes our understanding of an entire topic. Hirsch’s brilliant, artfully written Pulp Empire does that for mid-twentieth-century American studies. The billions of comic books that rolled off American presses and circumnavigated the globe in the 1940s and ’50s reveal significant unexplored aspects of American society, politics, and foreign policy. While Hirsch’s spectacular research introduces American historians to a new field of study, his elegant writing invites a broad audience to read this unique and beautifully produced book.”
— Martin J. Sherwin, Pulitzer Prize–winning coauthor of American Prometheus and author of Gambling with Armageddon

“It has been a long time since I read a history of comic books that genuinely brought significant new issues and sources to the table. Pulp Empire is such a book—smart, lively, and well-written. Hirsch positions the early decades of the American comic book in a global context and illuminates the anxieties this powerful new form of popular culture inspired not only in parents and cultural critics but also in government officials and world leaders.”
— Jared Gardner, author of Projections: Comics and the History of Twenty-First-Century Storytelling

"As Hirsch outlines in Pulp Empire, comics have always been entwined with capitalism, race, and foreign policy. . . . Hirsch makes an important inroad into not only understanding the cultural politics of the Cold War, but in the forces that led to the omnipresence of comic book motifs in the present."
— The Progressive

"Elegantly written and lavishly illustrated, the tome documents the author’s deep dive through the creepy archives of the United States government. . . . It’s a lurid, fascinating tale, narrated with pep and grace."
— The Lowbrow Reader

"A remarkable volume, very rich and unique in the depth of research, attractive in design, highly-revealing and full in content, and crisp and pleasurable in readability."
— International Journal of Comic Art

"Hirsch’s book is beautifully, evocatively written and—with its full-page color illustrations and gorgeous production value—will easily appeal to general audiences soaked in contemporary comic book culture. . . . Pulp Empire is an essential read for the current moment of reckoning in American culture, revealing how these issues shaped a business that has now, in the age of DC and Marvel blockbusters, become synonymous with America on the world stage."
— International Journal of Communication

"Pulp Empire is filled with fascinating anecdotes and incisive analysis of the ephemera of US empire. This book offers something for an array of audiences from fervent comic book fans to historians of American foreign policy. Hirsch deftly deals with several dimensions of comics’ hidden history from their perpetuation of racist and sexist tropes to their use as a unique tool of soft-power popular abroad across class lines. Finally, Hirsch’s analysis of the debates over the atomic age played out in comic book pages proves both entertaining and enlightening. Pulp Empire effectively interrogates the intersection between politics and popular culture and profiles how superheroes have been deployed to serve American expansionist goals."
— Not Even Past

“Vivid, lurid. . . Pulp Empire is an important addition to the growing library of books that are “serious” about comics. . . .  A must read for both scholars and fans.”
— St. Louis Jewish Light

"Hirsch in Pulp Empire for the first time analyzes the massive cultural and political potential of the comic book for world history. . . . Pulp Empire is an intriguing title that will find its way into many comic books studies libraries, and it is also of interest for students of American Studies and criminology."
— Pop Culture Shelf

"An ambitious work. . . Enormously enjoyable. . . To his credit, Hirsch pulls no punches in identifying racism as one of the linchpins of the pulp empire."
— Passport

"An extraordinary book that reveals just how heavily the federal government relied upon comic books to disseminate ideological messages, even as many politicians targeted them as a threat to morals at home. . . . A superb book about American cultural propaganda, one that deserves a wide audience and hopefully will spur additional research on this underaddressed aspect of American cultural diplomacy during the Cold War."
— Canadian Military History