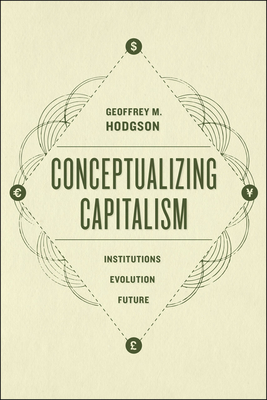 
Not On Our Shelves—Ships in 1-5 Days
A few centuries ago, capitalism set in motion an explosion of economic productivity. Markets and private property had existed for millennia, but what other key institutions fostered capitalism’s relatively recent emergence? Until now, the conceptual toolkit available to answer this question has been inadequate, and economists and other social scientists have been diverted from identifying these key institutions.

With Conceptualizing Capitalism, Geoffrey M. Hodgson offers readers a more precise conceptual framework. Drawing on a new theoretical approach called legal institutionalism, Hodgson establishes that the most important factor in the emergence of capitalism—but also among the most often overlooked—is the constitutive role of law and the state. While private property and markets are central to capitalism, they depend upon the development of an effective legal framework. Applying this legally grounded approach to the emergence of capitalism in eighteenth-century Europe, Hodgson identifies the key institutional developments that coincided with its rise. That analysis enables him to counter the widespread view that capitalism is a natural and inevitable outcome of human societies, showing instead that it is a relatively recent phenomenon, contingent upon a special form of state that protects private property and enforces contracts. After establishing the nature of capitalism, the book considers what this more precise conceptual framework can tell us about the possible future of capitalism in the twenty-first century, where some of the most important concerns are the effects of globalization, the continuing growth of inequality, and the challenges to America’s hegemony by China and others.
Geoffrey M. Hodgson is research professor at Hertfordshire Business School, University of Hertfordshire, England, and the author or coauthor of over a dozen books.
“In standard economics, capitalism has become an ill-defined concept, its analysis flawed from the very initial definition. Hodgson’s book reintroduces a sharp and precise definition, showing how a successful analysis of capitalism requires an understanding of the interactions of numerous complementary institutions, including sophisticated legal institutions. This is a remarkable and highly original piece of interdisciplinary scholarship that will greatly contribute to the understanding of contemporary capitalist economies."
— Ugo Pagano, University of Siena and Central European University

“There are a number of books that purport to consider modern capitalism, but none of these treats the subject so broadly or considers in anything like the detail here the history of social science thought on the topic. Hodgson’s discussion of the many issues he treats is broad, thoughtful, and highly literate.”
— Richard Nelson, Columbia University

"Hodgson’s goal in Conceptualizing Capitalism is to clarify the basic concepts of capitalism. He shows the interconnections of such vital concepts as capital, money, exchange, property, and law, and how they work together to determine the essential character of capitalism. Hodgson draws on literature old and new in composing his definitions, and he reveals the many errors into which those who use language carelessly or vaguely inevitably fall. Economists, often preoccupied with mathematical precision, have paid insufficient attention to conceptual precision. This carefully-argued and ultimately convincing book provides a welcome remedy."
— Bruce Caldwell, Duke University

“This is a magnum opus if ever there was one. Hodgson gives you everything you always wanted to know about capitalism, from a heterodox evolutionary economics perspective. A book that is impressively erudite, deeply rooted in the tradition of the discipline and in economic history. It is also remarkably optimistic on the future of capitalism and the prospects of political reform to restore the historical alliance between capitalism and social progress.”
— Wolfgang Streeck, emeritus director, Max Planck Institute for the Study of Societies

“Erudite and thought-provoking. . . . [Conceptualizing Capitalism] is a stimulating, historically grounded exploration of the subject and a rewarding, if occasionally dense, read.”
— Financial Times

“A rich traversal of capitalism in its myriad dimensions. . . . The book visits almost all dimensions of capitalism as we may think of it from employment, labour, firms, finance and property to the aspects that arguably constitute the core of this groundbreaking book: the role of the State and law.”
— LSE Review