The Book of Snakes: A Life-Size Guide to Six Hundred Species from around the World (Hardcover) 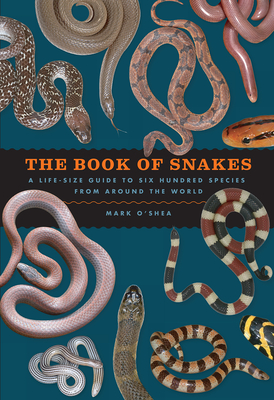 The Book of Snakes: A Life-Size Guide to Six Hundred Species from around the World (Hardcover)


Not On Our Shelves—Ships in 1-5 Days
For millennia, humans have regarded snakes with an exceptional combination of fascination and revulsion. Some people recoil in fear at the very suggestion of these creatures, while others happily keep them as pets. Snakes can convey both beauty and menace in a single tongue flick and so these creatures have held a special place in our cultures. Yet, for as many meanings that we attribute to snakes—from fertility and birth to sin and death—the real-life species represent an even wider array of wonders.
The Book of Snakes presents 600 species of snakes from around the world, covering nearly one in six of all snake species. It will bring greater understanding of a group of reptiles that have existed for more than 160 million years, and that now inhabit every continent except Antarctica, as well as two of the great oceans.
This volume pairs spectacular photos with easy-to-digest text. It is the first book on these creatures that combines a broad, worldwide sample with full-color, life-size accounts. Entries include close-ups of the snake’s head and a section of the snake at actual size. The detailed images allow readers to examine the intricate scale patterns and rainbow of colors as well as special features like a cobra’s hood or a rattlesnake’s rattle. The text is written for laypeople and includes a glossary of frequently used terms. Herpetologists and herpetoculturists alike will delight in this collection, and even those with a more cautious stance on snakes will find themselves drawn in by the wild diversity of the suborder Serpentes.
Mark O’Shea is a herpetologist, zoologist, author, lecturer, and television presenter. He is professor of herpetology at the University of Wolverhampton and consultant curator of reptiles at West Midland Safari Park. He has made ten expeditions to Papua New Guinea since 1986. Between 2009 and 2014 he was deputy leader of a team based out of Victor Valley College, California, that was conducting the first herpetofaunal survey of Timor-Leste. O’Shea has hosted numerous television series focused on snakes for the Discovery Channel, the BBC, and ITV, including four seasons as host of the Animal Planet/Discovery Channel show O’Shea’s Big Adventure. He has also run a variety of herpetological field projects for the Royal Geographical Society, Operation Raleigh, Raleigh Executive, and Discovery Expeditions. O’Shea is the author of five books, including A Guide to the Snakes of Papua New Guinea. He lives in Shropshire, England.
“O’Shea provides a rich introduction to the snake world, revealing that there are just over3,700 living snake species known today and detailing the vagaries of skin shedding, venom delivery and snake reproduction. Each of the species featured has a page devoted to it, with a map showing its location, information on its habits, plus color photographs of the snake itself. Flicking through the book reveals the amazing diversity of snakes—tiny acid-green Vinesnakes, vibrantly striped Rainbow Snakes and the ghost-like Japanese Aodaisho.”
— Wall Street Journal