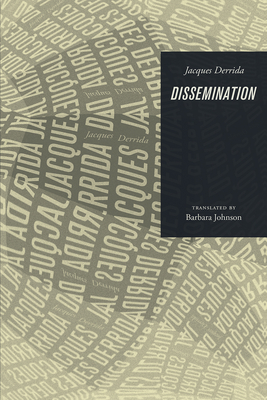 
Not On Our Shelves—Ships in 1-5 Days
"The English version of Dissemination [is] an able translation by Barbara Johnson . . . . Derrida's central contention is that language is haunted by dispersal, absence, loss, the risk of unmeaning, a risk which is starkly embodied in all writing. The distinction between philosophy and literature therefore becomes of secondary importance. Philosophy vainly attempts to control the irrecoverable dissemination of its own meaning, it strives—against the grain of language—to offer a sober revelation of truth. Literature—on the other hand—flaunts its own meretriciousness, abandons itself to the Dionysiac play of language. In Dissemination—more than any previous work—Derrida joins in the revelry, weaving a complex pattern of puns, verbal echoes and allusions, intended to 'deconstruct' both the pretension of criticism to tell the truth about literature, and the pretension of philosophy to the literature of truth."—Peter Dews, New Statesman
Jacques Derrida (1930–2004) was director of studies at the École des hautes études en sciences sociales, Paris, and professor of humanities at the University of California, Irvine. Several of his books have been published in their English translation by the University of Chicago Press.