Of Spirit: Heidegger and the Question (Paperback) 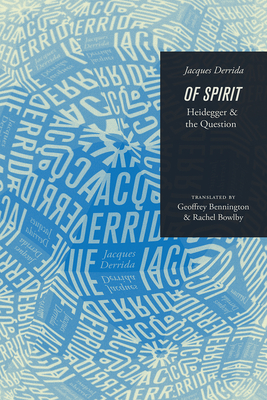 Of Spirit: Heidegger and the Question (Paperback)


Not On Our Shelves—Ships in 1-5 Days
"I shall speak of ghost, of flame, and of ashes." These are the first words of Jacques Derrida's lecture on Heidegger. It is again a question of Nazism—of what remains to be thought through of Nazism in general and of Heidegger's Nazism in particular. It is also "politics of spirit" which at the time people thought—they still want to today—to oppose to the inhuman.

"Derrida's ruminations should intrigue anyone interested in Post-Structuralism. . . . . This study of Heidegger is a fine example of how Derrida can make readers of philosophical texts notice difficult problems in almost imperceptible details of those texts."—David Hoy, London Review of Books

"Will a more important book on Heidegger appear in our time? No, not unless Derrida continues to think and write in his spirit. . . . Let there be no mistake: this is not merely a brilliant book on Heidegger, it is thinking in the grand style."—David Farrell Krell, Research in Phenomenology

Jacques Derrida (1930–2004) was director of studies at the École des hautes études en sciences sociales, Paris, and professor of humanities at the University of California, Irvine. Several of his books have been published in their English translation by the University of Chicago Press.

Geoffrey Bennington is the Asa G. Candler Professor of Modern French Thought at Emory University. He is the author of several books on Derrida and translator of many others by him, and he is coeditor of The Seminars of Jacques Derrida series.