The Market and Other Orders (The Collected Works of F. A. Hayek #15) (Paperback) 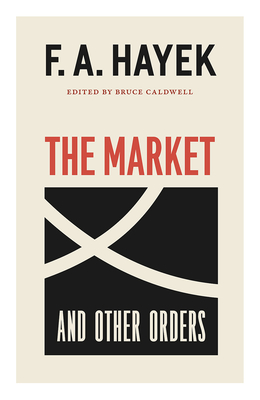 The Market and Other Orders (The Collected Works of F. A. Hayek #15) (Paperback)

This is book number 15 in the The Collected Works of F. A. Hayek series.

In addition to his groundbreaking contributions to pure economic theory, F. A. Hayek also closely examined the ways in which the knowledge of many individual market participants could culminate in an overall order of economic activity. His attempts to come to terms with the “knowledge problem” thread through his career and comprise the writings collected in the fifteenth volume of the University of Chicago Press’s Collected Works of F. A. Hayek series.
The Market and Other Orders brings together more than twenty works spanning almost forty years that consider this question. Consisting of speeches, essays, and lectures, including Hayek’s 1974 Nobel lecture, “The Pretense of Knowledge,” the works in this volume draw on a broad range of perspectives, including the philosophy of science, the physiology of the brain, legal theory, and political philosophy. Taking readers from Hayek’s early development of the idea of spontaneous order in economics through his integration of this insight into political theory and other disciplines, the book culminates with Hayek’s integration of his work on these topics into an overarching social theory that accounts for spontaneous order in the variety of complex systems that Hayek studied throughout his career.
Edited by renowned Hayek scholar Bruce Caldwell, who also contributes a masterly introduction that provides biographical and historical context, The Market and Other Orders forms the definitive compilation of Hayek’s work on spontaneous order.

Bruce Caldwell is research professor of economics and the director of the Center for the History of Political Economy at Duke University. He is the general editor of the Collected Works of F. A. Hayek series, also published by the University of Chicago Press.
“Hayek scholars will be grateful for this collection that shows how his seemingly disparate work in economics, methodology, psychology, and legal theory is actually part of an integrated whole, unified by the idea of spontaneous order. Brilliantly selected, well-organized, and concisely explained, this is a very strong addition to the Collected Works series.”
— Peter Boettke, George Mason University