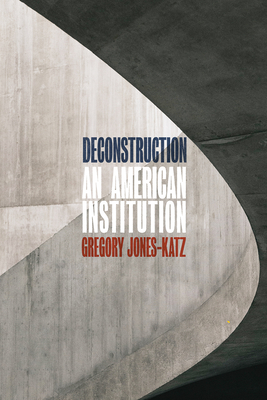 
Special Order—Subject to Availability
The basic story of the rise, reign, and fall of deconstruction as a literary and philosophical groundswell is well known among scholars. In this intellectual history, Gregory Jones-Katz aims to transform the broader understanding of a movement that has been frequently misunderstood, mischaracterized, and left for dead—even as its principles and influence transformed literary studies and a host of other fields in the humanities.
​
Deconstruction begins well before Jacques Derrida’s initial American presentation of his deconstructive work in a famed lecture at Johns Hopkins University in 1966 and continues through several decades of theoretic growth and tumult. While much of the subsequent story remains focused, inevitably, on Yale University and the personalities and curriculum that came to be lumped under the “Yale school” umbrella, Deconstruction makes clear how crucial feminism, queer theory, and gender studies also were to the lifeblood of this mode of thought. Ultimately, Jones-Katz shows that deconstruction in the United States—so often caricatured as a French infection—was truly an American phenomenon, rooted in our preexisting political and intellectual tensions, that eventually came to influence unexpected corners of scholarship, politics, and culture.

Gregory Jones-Katz is lecturer in history at the Chinese University of Hong Kong, Shenzhen.
"The power of Gregory Jones-Katz’s extraordinarily well-researched Deconstruction, apart from dodging the extremes of obeisance and dismissal, is not to have adopted deconstruction’s aversion toward situating the movement in its time and place. He capably walks his reader through the fine-grained details of seminal texts, but also wisely moves beyond them, perhaps implying that the school’s interest for us today lies less in its stable of familiar themes than in its improbable success."
— Chronicle of Higher Education

“A penetrating, illuminating, and highly readable study of a crucial episode in the intellectual and cultural history of late twentieth-century America. Jones-Katz pursues the trajectories of the American practitioners of deconstructionist thought with great insight, deep research, and stylistic verve. He offers many cogent accounts of the works and arguments of this sizeable group, and does so not only with attention to the inner logics of specific texts, but with considerable attention to their intellectual and institutional contexts.”
— Warren Breckman, author of Adventures of the Symbolic: Postmarxism and Radical Democracy

“An excellent, important, and timely book, calling our attention to a revolution in American intellectual life during the 1970s and ’80s. Jones-Katz guides us through the various ecosystems in which deconstructive thought was fostered and developed, showing us how it was able to take American academia by storm.”
— Edward Baring, author of Converts to the Real: Catholicism and the Making of Continental Philosophy

“An illuminating, often surprising account of deconstruction in American academia in the last third of the twentieth century. As one present at the creation and ascendancy of the ‘Hermeneutic Mafia,’ I repeatedly nodded assent—often with a chuckle—at his portraits of characters whom I had then encountered. Deconstruction is undoubtedly an inviting, important, and well-wrought contribution to modern American intellectual history.”
— Robert Westbrook, author of Democratic Hope: Pragmatism and the Politics of Truth