The Jewish Decadence: Jews and the Aesthetics of Modernity (Paperback) 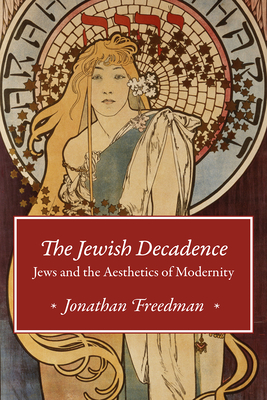 The Jewish Decadence: Jews and the Aesthetics of Modernity (Paperback)


Not On Our Shelves—Ships in 1-5 Days
As Jewish writers, artists, and intellectuals made their way into Western European and Anglo-American cultural centers, they encountered a society obsessed with decadence. An avant-garde movement characterized by self-consciously artificial art and literature, philosophic pessimism, and an interest in nonnormative sexualities, decadence was also a smear, whereby Jews were viewed as the source of social and cultural decline. In The Jewish Decadence, Jonathan Freedman argues that Jewish engagement with decadence played a major role in the emergence of modernism and the making of Jewish culture from the 1870s to the present.

The first to tell this sweeping story, Freedman demonstrates the centrality of decadence to the aesthetics of modernity and its inextricability from Jewishness. Freedman recounts a series of diverse and surprising episodes that he insists do not belong solely to the past, but instead reveal that the identification of Jewishness with decadence persists today.
Jonathan Freedman is the Marvin Felheim Collegiate Professor of English, American Studies, and Judaic Studies at the University of Michigan. He is the author of Professions of Taste: Henry James, British Aestheticism, and Commodity Culture; The Temple of Culture: Assimilation, Anti-Semitism, and the Making of Literary Anglo-America; and Klezmer America: Jewishness, Ethnicity, Modernity.

"It is chock-full of exciting and provocative ideas, but it is also just plain fun — something akin to Freedman leading the reader by the hand on a tour of a cultural landscape that he knows like the back of his hand."
— Los Angeles Review of Books

"Overall, The Jewish Decadence is a richly rewarding read, blending deep knowledge, provocative insight and unsparing honesty to the role Jews have played in fin-de-siècle culture of Europe and the USA. Barely a page goes by with an insight into cultural production and consumption and unexpected links between creators, places and ideas. This book will be of value to anyone wishing to under early Modernism and Jewish contribution to vanguard art."
— alexanderadamsart: Reviews of art, culture and literature

Bringing his capacious cultural expertise and scholarly rigor to a wide-ranging exploration of the association between Jews and decline and degeneracy, Jonathan Freedman performs an erudite, original, and wonderfully chutzpadik act of reclamation.
— Alisa Solomon, Columbia University

“This book takes us on an extraordinary journey through what the author calls ‘something like modernity,’ as it is to be found in dance, literature, song, painting, theatre, film, and history.  Decadence turns out to mean what it seems to mean, and an almost unimaginable range of other things as well. Its richness, as well as its constant entanglement in ideas of Jewishness, would have caused any other writer either to simplify or get lost, but Freedman wittily and resolutely does neither. His book is ‘example-drunk,’ as he says, but it doesn’t stumble. It celebrates complication and reflection and masquerade, and we find ourselves wishing the show—the one he is evoking and the one to be seen in the fabulous evocation itself—would never end.”
— Michael Wood, Princeton University

“Freedman reconceives of Jews as architects rather than victims of modernity. Although Jews were often demonized as sexual and artistic deviants, they also entered into dialogue with their detractors by contesting or reshaping the prejudices of the day. Most important, Jews played a central role in European culture as artists, critics, sponsors, networkers, and entrepreneurs; throughout the book, Freedman spots Jews where none have been discerned before, testifying to their ubiquity among the avant-garde.”
— Maud Ellman, University of Chicago

"A book that transforms our experiences of familiar works and encourages us to carry on the work of Jewish cultural studies, following the example of one of its most gifted practitioners."
— Reading Religion