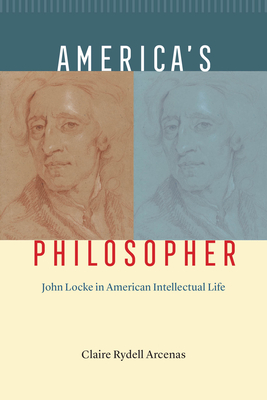 
On Our Shelves Now at:
America’s Philosopher examines how John Locke has been interpreted, reinterpreted, and misinterpreted over three centuries of American history.

The influence of polymath philosopher John Locke (1632–1704) can still be found in a dizzying range of fields, as his writings touch on issues of identity, republicanism, and the nature of knowledge itself. Claire Rydell Arcenas’s new book tells the story of Americans’ longstanding yet ever-mutable obsession with this English thinker’s ideas, a saga whose most recent manifestations have found the so-called Father of Liberalism held up as a right-wing icon.

The first book to detail Locke’s trans-Atlantic influence from the eighteenth century until today, America’s Philosopher shows how and why interpretations of his ideas have captivated Americans in ways few other philosophers—from any nation—ever have. As Arcenas makes clear, each generation has essentially remade Locke in its own image, taking inspiration and transmuting his ideas to suit the needs of the particular historical moment. Drawing from a host of vernacular sources to illuminate Locke’s often contradictory impact on American daily and intellectual life from before the Revolutionary War to the present, Arcenas delivers a pathbreaking work in the history of ideas.
Claire Rydell Arcenas is associate professor of history at the University of Montana.
"Arcenas has done valuable work in documenting Americans’ affection for an empiricist philosopher. Her discussion of twentieth-century scholarly debates over Locke’s significance, from Leo Strauss to J.G.A. Pocock, are accurate and well-expressed."
— Wall Street Journal

“As Arcenas [shows], with detailed documentation and persuasive narrative . . . Americans deformed and truncated [Locke into] the alleged father of liberalism . . . With regard to ‘Locke’s polyvalent influence,’ Arcenas argues that for two centuries after his death he was almost omnipresent in colonial libraries, college reading lists, and periodical polemics, and almost as well known for counsel on card-playing and commonplacing as for epistemology or educational prescriptions.”
— Times Literary Supplement

“A wonderfully wide-ranging and insightful history of John Locke’s changing reputation in America, moving from the early eighteenth century to the present with terrific scholarly command and authority. Locke’s invention, more than a century after the fact, as the key political theorist of the American Revolution is only the most striking of its findings. This book will surprise and inform every reader invested in the history of American political culture. There is simply nothing comparable in the existing literature.”
— Daniel Rodgers, Princeton University

“If you thought you understood John Locke’s vital role in American thought, Arcenas’s fascinating book will make your jaw drop. Make no mistake, Locke has indeed been ‘America’s philosopher’ since his ideas first arrived in the early eighteenth century. But as readers will discover in her meticulously researched and absorbing study, Locke has mattered to Americans in ways wholly unexpected.”
— Jennifer Ratner-Rosenhagen, University of Wisconsin–Madison

“America’s Philosopher accomplishes two tasks at once: it brings to life the fullness of John Locke’s thought and tracks the multiple ways a dynamic and changing America engaged with varying aspects of that thought. Arcenas shows how the early modern British philosopher’s place in American thought and culture shifted over three centuries, from a cherished guide to child-rearing, education, and toleration in the eighteenth century to a one-dimensional libertarian hero in our own day. Drawing on common-place books and college curricula, the work of mid-century scholars and the speeches of senators, Arcenas tells this fascinating story with clarity and verve.”
— Leslie A. Butler, Dartmouth College