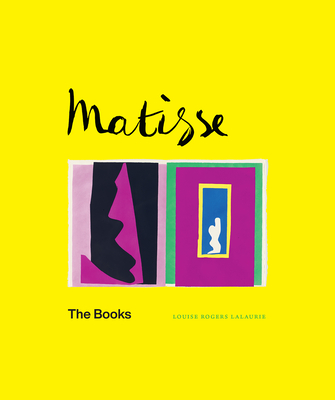 
In Stock—Click for Locations
The livre d’artiste, or “artist’s book,” is among the most prized in rare book collections. Henri Matisse (1869–1954) was one of the greatest artists to work in this genre, and he created his most important during a period of intense personal and physical suffering. Brimming with powerful themes and imagery, these works are crucial to understanding Matisse’s oeuvre.

With deftness and sensitivity, Louise Rogers Lalaurie reintroduces us to Matisse by considering how in each volume, Matisse constructed an intriguing dialogue between word and image. Examining this page-by-page interplay, translating key sequences, and discussing the books’ distinct themes and production histories, Lalaurie offers the thoughtful analysis these works deserve. Together Matisse’s artist books reveal his deep engagement with questions of beauty and truth; his faith; his perspectives on aging, loss, and inspiration; and his relationship to his critics, the French art establishment, and the women in his life. In addition, Lalaurie illuminates Matisse’s often misunderstood political affinities—though Matisse was vilified in his time for choosing to live in the collaborationist Vichy zone, his wartime books reveal a body of work that stands as a deeply personal statement of resistance.

Lavishly illustrated, Matisse: The Books showcases a rich group of underappreciated works and brings unprecedented clarity to a controversial period in the artist’s life.
Louise Rogers Lalaurie is a writer and translator based between the Seine Valley, near Paris, and the UK. Her published translations include more than thirty nonfiction titles covering the fine and decorative arts. She translates for leading art institutions including the Louvre, the Centre Pompidou Paris and Metz, and L’Institut national d’histoire de l’art.
"[A] fresh, in-depth, lavishly illustrated study."
— Financial Times

"These books-as-works-of-art are both a running commentary upon Matisse himself, the ever evolving, ever surprising image-maker, and an extraordinarily vivid series of critical responses to words that are often so rich and elusive in their meanings."
— Hyperallergic

"A well-illustrated scholarly assessment of the books by artist Henri Matisse has long been overdue, but Lalaurie's achievement makes the wait worthwhile. . . . Clear writing and argumentation, solid research, close readings of Matisse's work, and elegant prose distinguish Lalaurie's analyses, and these qualities are reinforced by a commendable book design that gives priority to multipage spreads from the original illustrated books. Lalaurie offers a rediscovery of Matisse to confirm his status at the heart of modern art. . . . Highly recommended."
— Choice

"Henri Matisse did not confine his art to the cut-out or the canvas. In fact, over a period of 18 years, he produced eight limited-edition books that demonstrate a deft understanding of the interplay between word and image. In this new volume, Louise Rogers Lalaurie considers the significance of these editions in relation to his wider practice, particularly the 'second life' of his paper cut-outs. Not only does it contain rarely seen images, but also a sensitive analysis of his relationships (as inscribed in these books) and his political affiliations during World War II."
— Arts Society

"As befits the topic, the book is elegantly designed and produced, its format commensurate with that of the volumes it describes. Lalaurie walks the reader through each publication, practically page by page and image by image. . . . In books, as in any artistic medium, nothing can replace experiencing the real thing. But this extensive study, with its many reproductions and engaging commentary, offers a worthwhile late-period portrait of an artist who, as Aragon wrote in one of his many encomia, ‘used books to tell the story of his life’ and ‘renew[ed] the very concept of illustration’."
— Apollo

"This sumptuous publication brings together Matisse’s eight livres d’artiste with meticulous attention to feel and detail. . . . The sheer number of images reproduced in sequence and the contextual detail given is much appreciated too in a publication that ultimately brings us closer to Matisse and his books."
— Studio International

"[Lalaurie's] illuminating contextual and interpretative essays accompany reproductions of substantial portions of each book, including their texts. . . . Though the books contain many familiar images, their original contexts as part of larger series of images and texts is often forgotten. . . . Together they amount to a sustained and transformative study of writing and drawing, word and image, in which Matisse developed ideas that resonate throughout his work, finding joyous resolution in the large-scale creations of his final years. . . . [A] beautifully designed and produced volume."
— New European

“A welcome view onto this often underappreciated component of the French master’s oeuvre.”
— Andrew Shea