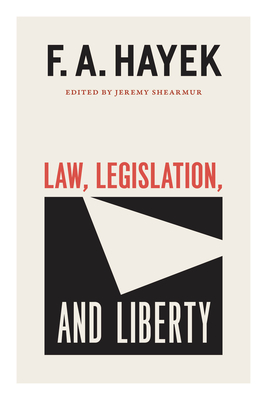 This is book number 19 in the The Collected Works of F. A. Hayek series.

A new edition of F. A. Hayek’s three-part opus Law, Legislation, and Liberty, collated in a single volume
In this critical entry in the University of Chicago’s Collected Works of F. A. Hayek series, political philosopher Jeremy Shearmur collates Hayek’s three-part study of law and liberty and places Hayek’s writings in careful historical context. Incisive and unrestrained, Law, Legislation, and Liberty is Hayek at his late-life best, making it essential reading for understanding the philosopher’s politics and worldview.

These three volumes constitute a scaling up of the framework offered in Hayek’s famed The Road to Serfdom. Volume 1, Rules and Order, espouses the virtues of classical liberalism; Volume 2, The Mirage of Social Justice, examines the societal forces that undermine liberalism and, with it, liberalism’s capacity to induce “spontaneous order”; and Volume 3, The Political Order of a Free People, proposes alternatives and interventions against emerging anti-liberal movements, including a rule of law that resides in stasis with personal freedom.

Shearmur’s treatment of this challenging work—including an immersive new introduction, a conversion of Hayek’s copious endnotes to footnotes, corrections to Hayek’s references and quotations, and the provision of translations to material that Hayek cited only in languages other than English—lends it new importance and accessibility. Rendered anew for the next generations of scholars, this revision of Hayek’s Law, Legislation, and Liberty is sure to become the standard.
Jeremy Shearmur is a fellow emeritus in philosophy at the Australian National University. His published books include The Political Thought of Karl Popper and Hayek and After: Hayekian Liberalism as a Research Programme, among others.