Being Somebody and Black Besides: An Untold Memoir of Midcentury Black Life (Hardcover) 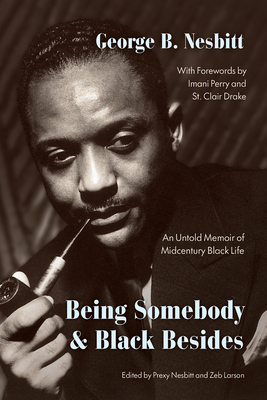 Being Somebody and Black Besides: An Untold Memoir of Midcentury Black Life (Hardcover)


In Stock—Click for Locations
An immersive multigenerational memoir that recounts the hopes, injustices, and triumphs of a Black family fighting for access to the American dream in the twentieth century.

The late Chicagoan George Nesbitt could perhaps best be described as an ordinary man with an extraordinary gift for storytelling. In his newly uncovered memoir—written fifty years ago, yet never published—he chronicles in vivid and captivating detail the story of how his upwardly mobile Midwestern Black family lived through the tumultuous twentieth century.

Spanning three generations, Nesbitt’s tale starts in 1906 with the Great Migration and ends with the Freedom Struggle in the 1960s. He describes his parents’ journey out of the South, his struggle against racist military authorities in World War II, the promise and peril of Cold War America, the educational and professional accomplishments he strove for and achieved, the lost faith in integration, and, despite every hardship, the unwavering commitment by three generations of Black Americans to fight for a better world. Through all of it—with his sharp insights, nuance, and often humor—we see a family striving to lift themselves up in a country that is working to hold them down.

Nesbitt’s memoir includes two insightful forewords: one by John Gibbs St. Clair Drake (1911–90), a pioneer in the study of African American life, the other a contemporary rumination by noted Black studies scholar Imani Perry. A rare first-person, long-form narrative about Black life in the twentieth century, Being Somebody and Black Besides is a remarkable literary-historical time capsule that will delight modern readers.

Zeb Larson is a writer and historian based in Columbus, Ohio.
"If his story comes off unremarkable, that’s because he presented himself as unremarkable. Which is an odd thing to write. To say Nesbitt was ordinary is to suggest guts, humility and decency are ordinary."
— Chicago Tribune

“A part of a remarkable and accomplished family of Black educators, organizers, and crusaders, Nesbitt led an amazing life as a World War II veteran, civil rights lawyer, Harvard graduate, and official in the Kennedy administration. The story of his life offers a powerful glimpse into the issues of race, politics, and public policy over the course of the twentieth century. A compelling and thought-provoking life story and a wonderful addition to the growing genre of Black biography.”
— Barbara Ransby, author of 'Making All Black Lives Matter: Reimagining Freedom in the Twenty-First Century'

“A fascinating memoir on par with Richard Wright’s Black Boy/American Hunger. Through Nesbitt’s engaging storytelling and revealing narrative, Being Somebody and Black Besides will remind people of the rich complexity of life in Black America during Nesbitt’s formative years that is seldom told or imagined today.”
— Robert Stepto, Yale University

“This is a searing portrait of an ordinary, yet extraordinary, middle-class Black man forced to endure the indignity of having to fight for fair play from people far less ‘civilized’ than he. A keen observer of the ‘ways of white folks,’ Nesbitt was a brilliant, sarcastic, insightful analyst of the color line, even as he willed himself to believe in his country and its ideals. This memoir reminds us how much we owe the early fighters for civil rights, who endured so many insults and injuries as they fought to widen opportunities for Black people and dismantle northern style Jim Crow. Nesbitt’s accounts of racism are unforgettable in their detail, anger, sheer absurdity, and casual cruelty.”
— Martha Biondi, Northwestern University