The Book of Minds: How to Understand Ourselves and Other Beings, from Animals to AI to Aliens (Hardcover) 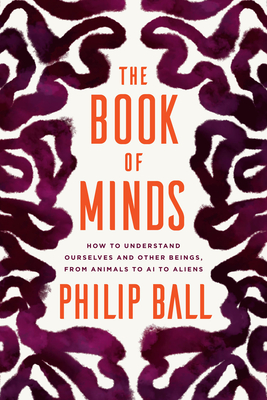 The Book of Minds: How to Understand Ourselves and Other Beings, from Animals to AI to Aliens (Hardcover)


In Stock—Click for Locations
Popular science writer Philip Ball explores a range of sciences to map our answers to a huge, philosophically rich question: How do we even begin to think about minds that are not human?

Sciences from zoology to astrobiology, computer science to neuroscience, are seeking to understand minds in their own distinct disciplinary realms. Taking a uniquely broad view of minds and where to find them—including in plants, aliens, and God—Philip Ball pulls the pieces together to explore what sorts of minds we might expect to find in the universe. In so doing, he offers for the first time a unified way of thinking about what minds are and what they can do, by locating them in what he calls the “space of possible minds.” By identifying and mapping out properties of mind without prioritizing the human, Ball sheds new light on a host of fascinating questions: What moral rights should we afford animals, and can we understand their thoughts? Should we worry that AI is going to take over society? If there are intelligent aliens out there, how could we communicate with them? Should we? Understanding the space of possible minds also reveals ways of making advances in understanding some of the most challenging questions in contemporary science: What is thought? What is consciousness? And what (if anything) is free will?

Informed by conversations with leading researchers, Ball’s brilliant survey of current views about the nature and existence of minds is more mind-expanding than we could imagine. In this fascinating panorama of other minds, we come to better know our own.
Philip Ball is a freelance writer and broadcaster, and was an editor at Nature for more than twenty years. He writes regularly in the scientific and popular media and has written many books on the interactions of the sciences, the arts, and wider culture, including H2O: A Biography of Water and The Music Instinct. His book Critical Mass won the 2005 Aventis Prize for Science Books. Ball is also a presenter of Science Stories, the BBC Radio 4 series on the history of science. He trained as a chemist at the University of Oxford and as a physicist at the University of Bristol. He lives in London.
"Ball argues that we must look beyond our own brains and delve into the minds of other creatures if we want to truly understand ourselves and comprehend the possibility of alien or machine intelligence."
— New Scientist, "Don't Miss"

“A journey into the concept of the mind, mixing neurology, philosophy, technology, and other disciplines.  Although everyone has a mind, few experts agree on its makeup. Ball delivers a fine investigation of the possibilities. . . . Many of his topics are among the hottest in neuroscience today, explored by scores of academics and popularizers such as Oliver Sacks, Antonio Damasio, and Daniel Dennett. Building on their theories and others, Ball makes a useful addition to the literature. A difficult subject lucidly illuminated, if not fully explained.”
— Kirkus Reviews

"Ball, a former editor at Nature, attempts to conceptualize the makeup of minds truly alien to our own, including those of plants, robots, and fungi. He provides a definition of what it means to have a mind (it’s all about an entity’s particular experience of being itself), and in doing so, illuminates much of what makes human minds unique."
— Publishers Weekly

“The award-winning science writer [Ball] explores the diversity of thinking minds, from our human ones to those of mammals, insects, computers, and plants.”
— Bookseller

"With ambition and patience, in The Book of Minds, British science writer Philip Ball explores the parameters and functions of actual, virtual, and possible minds. The journey begins with humans and our fellow organisms on Earth (including plants and fungi) and ends with machine-based minds (artificial intelligence) and minds beyond our grasp (extraterrestrials and even God). The Book of Minds addresses everything from intelligence and consciousness to agency and free will. In doing so, Ball risks biting off more than we can chew. And yet the book reads swiftly and smoothly. Organized into 10 generous chapters, the book often feels like the educated rambling of a passionate dilettante. Ball’s take is wide and balanced, likely to please the demigods of mainstream academe while veiling valiant minority reports in its interstices."
— Science

"Comprehensive and far-ranging. . . . This extensive tome will be a must-read for those with a keen interest in psychology, philosophy, and cognitive science, and for those who want to embark on a deep dive into the significance of the mind."
— Library Journal

"A most thought-provoking book. . . . Packed with loads of information on the behavior of animals representing diverse species—ranging from various mammals, including optimistic pigs and aesthetic dogs, to tool-making birds, bees and “hive minds,” intelligent alien octopuses, plants, machines, and other entities—this wide-ranging book is a gem. It opens up the door to a pluralistic view of what is a mind, that there isn’t one kind of mind in a wide range of nonhumans and other entities, that we’re not on top of the list of minded beings, and that there’s no reason to compare different kinds of minds to ours."
— Psychology Today

"Philip Ball... urges us to explore ‘the space of possible minds’, rather than making the human mind, as pre-Copernican astronomers did the world, central and unique."
— The Spectator

"In The Book of Minds: How To Understand Ourselves and Other Beings, From Animals to AI to Aliens, science writer Philip Ball explores the minds or mind-like qualities that seem to exist in the world, and how best to make sense of it all when the science of subjective experience remains so uncertain."
— Storytelling Animals

“The Book of Minds is an extremely thoughtful, well-written, and entertaining survey of current views about the nature—and existence—of minds. While fairly light in tone and often humorous, the book itself is quite serious, and Ball does an excellent job of explaining difficult or abstruse concepts (from quantum mechanics to evolution to neuroscience) in clear language. Omnivorous in its consideration of topics and resistant to dogmatism, Ball’s book is a sustained, intelligent meditation on questions of deep scientific and human importance.”
— David Sepkoski, Thomas M. Siebel Chair in History of Science at the University of Illinois at Urbana-Champaign, author of "Catastrophic Thinking: Extinction and the Value of Diversity from Darwin to the Anthropocene"

“Ball’s synoptic overview of all the sorts of minds that may exist brings together a huge wealth of ideas and facts, presenting them in a digestible and engaging form. Beginning with a discussion of what we mean by mind and what seems notable about human minds, he considers, in turn, various sorts of animals, plants, animal colonies, AI, aliens, and God, before wrapping up with a chapter on the problem of free will. A valuable introduction to scientific and philosophical work on the varieties of mindedness.”
— Luke Roelofs, Center for Mind, Brain, and Consciousness, New York University, author of "Combining Minds: How to Think about Composite Subjectivity"