What's Eating the Universe?: And Other Cosmic Questions (Hardcover) 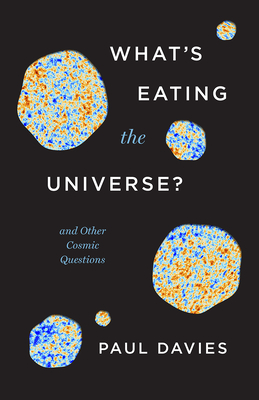 What's Eating the Universe?: And Other Cosmic Questions (Hardcover)


Not On Our Shelves—Ships in 1-5 Days
Combining the latest scientific advances with storytelling skills unmatched in the cosmos, an award-winning astrophysicist and popular writer leads us on a tour of some of the greatest mysteries of our universe.

In the constellation of Eridanus, there lurks a cosmic mystery: It’s as if something has taken a huge bite out of the universe. But what is the culprit? The hole in the universe is just one of many puzzles keeping cosmologists busy. Supermassive black holes, bubbles of nothingness gobbling up space, monster universes swallowing others—these and many other bizarre ideas are being pursued by scientists. Due to breathtaking progress in astronomy, the history of our universe is now better understood than the history of our own planet. But these advances have uncovered some startling riddles. In this electrifying new book, renowned cosmologist and author Paul Davies lucidly explains what we know about the cosmos and its enigmas, exploring the tantalizing—and sometimes terrifying—possibilities that lie before us.

As Davies guides us through the audacious research offering mind-bending solutions to these and other mysteries, he leads us up to the greatest outstanding conundrum of all: Why does the universe even exist in the first place? And how did a system of mindless, purposeless particles manage to bring forth conscious, thinking beings? Filled with wit and wonder, What’s Eating the Universe? is a dazzling tour of cosmic questions, sure to entertain, enchant, and inspire us all.
Paul Davies is a theoretical physicist, cosmologist, astrobiologist, broadcaster, and best-selling author. A winner of the prestigious Templeton Prize, he is Regents’ Professor of Physics and director of the Beyond Center for Fundamental Concepts in Science at Arizona State University.
"Lessons in cosmology and astrophysics abound in this enthusiastic primer from physicist Davies. In answering thirty questions, Davies aims to show how 'beautiful and awe-inspiring' the world is. . . . Accessible writing and a breezy appreciation for discovery make this a great introduction for readers new to physics."
— Publishers Weekly

"Dark matter, black holes, dark energy: with all this shadowy terminology in play, it’s no wonder when laypeople find cosmology off-putting, so What’s Eating the Universe? illumines the mysteries of quantum physics in a nonthreatening way."
— Foreword Reviews

"A whirlwind tour through the vastness of space and the innermost recesses of subatomic matter. . . . A long career in cosmology, astrobiology, and quantum mechanics gives Davies a keen insight into the realities of research. . . . Like the immense void that gapes across the sky in the direction of the constellation Eridanus, a yawning emptiness that some have suggested may be the sign of another universe set to gobble up our own, the mysteries of space are so vast and so strange that we cannot but be amazed."
— Wall Street Journal

"Astrophysicist Davies takes a tour of the cosmos’s grand questions and considers, among other things, supermassive black holes."
— Publishers Weekly

"From ancient astronomy and Newton's Law of gravity to dark energy, time loops and extraterrestrial life, the distinguished science writer with a 'short, inspiring and highly entertaining' account of the history of the universe, framed through thirty cosmological conundrums."
— Bookseller

"Understanding theoretical physics is a daunting task, but cosmologist Davies’s new book What’s Eating the Universe? is here to guide readers through the field. Davies covers general relativity, antimatter, time travel, the multiverse, and just about any other topic he could fit into the book’s two hundred pages. Each chapter is short—less than ten pages—but jargon-free and full of information. Davies uses a conversational tone to draw the reader in as he skims the history, experiments, and significance of each concept. Regardless of the reader’s prior physics knowledge, the book provides an accessible introduction to cosmology."
— Physics Today

"A whistle-stop tour of the biggest mysteries that cosmologists are investigating today. . . . The eponymous chapter details an unexpected void-like cold spot that astronomers have found in the constellation of Eridanus. Speculations follow that our universe might be spontaneously engulfed by a collision with another, or by the quantum vacuum decaying to a lower energy level. If you can bear to contemplate such scary prospects, this book is a fun way of making sure you’re all caught up on where cosmology is at today."
— Physics World

"This is physicist and renowned author Davies’s specialty—providing interesting and provocative commentary on the most profound questions the universe has to offer. And in his compelling new book, What’s Eating the Universe?, Davies excels in succinctly addressing the big intangibles; the cosmological conundrums that haven’t received as much attention as dark matter, dark energy, what triggered the big bang, and the ultimate fate of the universe."
— Forbes

"What's Eating the Universe? gives a concise summary of what we know about the universe, including the Big Bang, inflation, the existence . . . of what we call dark matter and dark energy, the possibility of other universes, black holes and the nature of time—all in around 150 accessible and beautifully written pages that can be read in short, discrete chunks. As a whistle-stop tour, it is breathtaking."
— Times Higher Education

“Why is the night sky dark? Where is the center of the Universe? Is time travel possible? How many universes are there? These are some of the thirty questions that Davies tackles in his latest book. Some of the answers are settled by consensus, others are more speculative; all are thought-provoking. The chapters are arranged roughly in chronological order of the observations and theoretical advances to which they relate, making the book an entertaining and accessible whistle-stop tour of (mostly Western) thinking about cosmology.”
— Nature Astronomy

"Recommended [for] all readers."
— Choice

“Brilliant. You won’t find a clearer, more engaging guide to what we know (or would like to know) about the universe and how it is put together.”
— Bill Bryson

“What’s Eating the Universe? is a veritable feast for curious minds. Davies, a polymath and lyrical writer, masterfully tackles all the big questions ranging from why this Universe to the meaning of life and the significance of the present moment—a whirlwind journey through ideas that have shaped our understanding of the cosmos and its constituents.”
— Priyamvada Natarajan, author of "Mapping the Heavens: The Radical Scientific Ideas That Reveal the Cosmos"

“A whistle-stop tour of the major questions in contemporary cosmology.”
— Philip Ball, author of "Beyond Weird: Why Everything You Thought You Knew about Quantum Physics Is Different"

“Davies gives us a thought-provoking, fascinating, and delightful journey through some of the Big Questions that have perplexed and tantalized scientists throughout history. These are the questions and paradoxes that have stumped and teased history’s greatest minds. What happened before the beginning? What is the meaning of the universe? Are there other universes?”
— Michio Kaku

“Davies brings his customary lucidity to a survey of some of the most fascinating and puzzling aspects of our universe, simultaneously educating us about its vertiginous wonders and giving us a real sense of science’s questions as it confronts and explores them and wrestles with their mystery. It is an absorbing and stimulating read, one of the best of its kind.”
— A. C. Grayling

“What’s Eating the Universe? is Davies at his very best. He brings a lifetime of experience in explaining mysteries of space and time to offer thought-provoking essays on deep questions in bite-sized, easily digestible chunks. There is no better overview of the advances made by cosmologists in recent decades.”
— John Gribbin

“Davies has selected a wonderful potpourri of deep questions with incomplete answers. The result is a delightful, fresh-smelling account of the cutting edge of modern cosmology. He is truly exceptional at explaining all of this in his inimitable style—let’s say ‘astropoetry.’”
— Simon Mitton, University of Cambridge

"A lucid, simple, informative, and good-humored primer on the big questions of modern physics and cosmology, which describes not only the triumphs, but the remaining difficulties. Davies at his best!"
— Ian Stewart, author of "Calculating the Cosmos"