The Genesis Quest: The Geniuses and Eccentrics on a Journey to Uncover the Origin of Life on Earth (Paperback) 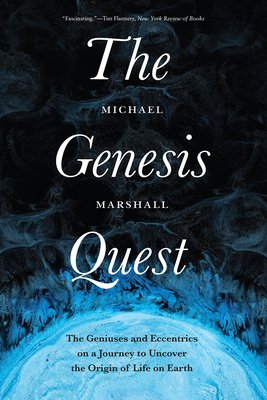 The Genesis Quest: The Geniuses and Eccentrics on a Journey to Uncover the Origin of Life on Earth (Paperback)


In Stock—Click for Locations
From the primordial soup to meteorite impact zones, the Manhattan Project to the latest research, this book is the first full history of the scientists who strive to explain the genesis of life.

How did life begin? Why are we here? These are some of the most profound questions we can ask.

For almost a century, a small band of eccentric scientists has struggled to answer these questions and explain one of the greatest mysteries of all: how and why life began on Earth. There are many different proposals, and each idea has attracted passionate believers who promote it with an almost religious fervor, as well as detractors who reject it with equal passion.

But the quest to unravel life’s genesis is not just a story of big ideas. It is also a compelling human story, rich in personalities, conflicts, and surprising twists and turns. Along the way, the journey takes in some of the greatest discoveries in modern biology, from evolution and cells to DNA and life’s family tree. It is also a search whose end may finally be in sight.

In The Genesis Quest, Michael Marshall shows how the quest to understand life’s beginning is also a journey to discover the true nature of life, and by extension our place in the universe.
Michael Marshall is a science writer interested in life sciences and the environment. He has a BA and MPhil in experimental psychology from the University of Cambridge and an MSc in science communication from Imperial College, London. He has worked as a staff journalist at New Scientist and the BBC. Since 2017 he has been a freelance writer, published by outlets including BBC Future, the Observer, Nature, New Scientist, and the Telegraph. In 2019 he was shortlisted for News Item of the Year by the Association of British Science Writers. He lives in Devon, UK, with his wife and daughter.
“In The Genesis Quest, the science writer Michael Marshall argues that belief in a life force long stymied progress in understanding life’s origins. It was only with publication of Darwin’s theory of evolution by natural selection in 1859 that the notion that the first living thing must have had a precursor became widespread. As science advanced, it was established that a collection of molecules with some lifelike properties must have given rise to life. Marshall’s book focuses on the chemical research—from the first speculative insights made by brilliant minds to the complex experiments that have increasingly dominated the field—into life’s origins. It’s a fascinating and challenging story, and leavened with mini-biographies, the best of which are based on his own interviews with his subjects."
— Tim Flannery

“In his recently published The Genesis Quest: The Geniuses and Eccentrics on a Journey to Uncover the Origin of Life on Earth, author Marshall examines the ideas and researches of some of those who sought or are still seeking to uncover the explanation—or perhaps explanations—to this grand mystery. Described as being filled with colorful accounts of ‘ingenuity, rivalry, and staggering levels of bloody-mindedness,’ this is a work that promises to be as lively in its telling as its subject is thought-provoking.”
— The Well-read Naturalist

"Marshall provides an historical review of the search for the origin of life. . . . Marshall's text provides an approachable introduction to how modern science investigates the origin of life, and also offers an interesting window on the lives of the scientists involved. Recommended."
— Choice

"Marshall knows his stuff. . . . If you have any interest in delving deeper into origin-of-life research, The Genesis Quest makes a fantastic starting point that will give you the lay of the land. It gets my unreserved recommendation."
— Inquisitive Biologist

"The book has many strengths...[it is] enjoyable to read and very informative. Importantly, it will be extremely accessible to a broad audience, including explanations of the most technical biochemical concepts or processes."
— The Quarterly Review of Biology

"This book explores multiple theories about the origin of life and the story of how these ideas have progressed over the last century. The book's distinctive style comes from well-researched analysis of the behavior and lifestyles of the various scientists who have contributed to this fascinating and uniquely difficult question. . . . This book is an extremely stimulating read and I recommend it most strongly to scientists and laymen alike."
— Jim Lynch OBE FRSB

"The Genesis Quest is a tour-de-force recount of the eclectic effort to understand the origins of life on Earth, authored by science writer Marshall. Here is a tale that spans from prebiotic chemistry to protocells, interlaced with stories of the idiosyncrasies of the scientists involved. It's a union of the sciences—synthetic chemistry, astrobiology, biochemistry, microbiology, ecology. Much like the primordial polymer blob ‘coacervates’ that coalesce into one, discussed early in the book, famous names in science quickly become associated with personality and foibles, putting more than just a face to the names."
— American Society for Microbiology blog, "Small Things Considered"

“Marshall has rounded up all the past and current thinking about this profound and puzzling question—how did life begin?—into a neat, enthralling, and highly digestible package. He doesn’t pretend we can answer the question, but does justice to all the key proposals so far. And if anything, his survey of potential solutions makes the appearance of life on Earth seem all the more astonishing as we examine the issue ever more closely.”
— Philip Ball, author of "How to Grow a Human: Adventures in How We Are Made and Who We Are"

“Prepare yourself for a dazzling intellectual journey: the science is fascinating, the cast of characters all-too-human, and the philosophical insights deep. Written in clear and entertaining prose, like a Sherlock Holmes story, this is the best book I know for general readers about the quest to solve one of our most enduring mysteries: how and where, in a seemingly purposeless universe, life began on planet earth.”
— Oren Harman, author of "Evolutions: Fifteen Myths That Explain Our World"

“The Genesis Quest recounts remarkable episodes in the history of attempts to scientifically understand the origin of life. Combining exceptionally clear expositions of what is scientifically at stake, distinctive humor, and a roving eye for the telling anecdote, this is anything but a tedious scientific genealogy. Marshall has a flair and talent for explaining each individual experiment and its intellectual context. The Genesis Quest offers a well-done romp through some fascinating and complicated terrain.”
— Luis A. Campos, author of "Radium and the Secret of Life"