Fully Grown: Why a Stagnant Economy Is a Sign of Success (Paperback) 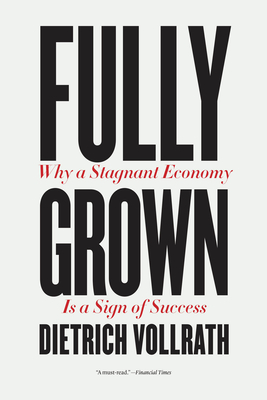 Fully Grown: Why a Stagnant Economy Is a Sign of Success (Paperback)


In Stock—Click for Locations
Vollrath challenges our long-held assumption that growth is the best indicator of an economy’s health.

Most economists would agree that a thriving economy is synonymous with GDP growth. The more we produce and consume, the higher our living standard and the more resources available to the public. This means that our current era, in which growth has slowed substantially from its postwar highs, has raised alarm bells. But should it? Is growth actually the best way to measure economic success—and does our slowdown indicate economic problems?

The counterintuitive answer Dietrich Vollrath offers is: No. Looking at the same facts as other economists, he offers a radically different interpretation. Rather than a sign of economic failure, he argues, our current slowdown is, in fact, a sign of our widespread economic success. Our powerful economy has already supplied so much of the necessary stuff of modern life, brought us so much comfort, security, and luxury, that we have turned to new forms of production and consumption that increase our well-being but do not contribute to growth in GDP.

In Fully Grown, Vollrath offers a powerful case to support that argument. He explores a number of important trends in the US economy: including a decrease in the number of workers relative to the population, a shift from a goods-driven economy to a services-driven one, and a decline in geographic mobility. In each case, he shows how their economic effects could be read as a sign of success, even though they each act as a brake of GDP growth.  He also reveals what growth measurement can and cannot tell us—which factors are rightly correlated with economic success, which tell us nothing about significant changes in the economy, and which fall into a conspicuously gray area.

Sure to be controversial, Fully Grown will reset the terms of economic debate and help us think anew about what a successful economy looks like.
Dietrich Vollrath is professor of economics at the University of Houston. He is coauthor of Introduction to Economic Growth, now in its third edition, and writes the Growth Economics Blog.

“A wide-ranging and original study of the slowdown in economic growth in America in recent decades.”

"An impressive survey of the economics literature on US productivity. For those interested in the subject, it is a must-read."

“For Dietrich Vollrath of the University of Houston, low growth is reason for cheer. In a new book he argues that America’s growth has slowed because so much in the economy has gone so well. . . . His triumph is in showing the degree to which these [GDP numbers] make economic growth an unreliable measure of success. Attempting to capture progress in a single number is a fool’s errand.”

"Taken together, slower growth in the labor force and the shift to services can explain almost all the recent slowdown, according to Vollrath. He’s unimpressed by many other explanations that have been offered, such as sluggish rates of capital investment, rising trade pressures, soaring inequality, shrinking technological possibilities, or an increase in monopoly power. In his account, it all flows from the choices we’ve made: 'Slow growth, it turns out, is the optimal response to massive economic success.'”
— New Yorker

"Given the likelihood of recession, some desperate West Wing scribe might want to sneak a few thoughts from Vollrath's Fully Grown: Why a Stagnant Economy Is a Sign of Success into the State of the Union speech. Challenging the automatic equation between economic health and a growing gross domestic product, the author argues that capitalism 'has already supplied so much of the necessary stuff of modern life--brought us so much comfort, security and luxury--that we have turned to new forms of production and consumption that increase our well-being but do not contribute to growth in GDP.'"
— Inside Higher Ed

"For the past decade, Robert Gordon has written about the rise and fall of American growth, praising the first in our past that was and lamenting the second in our present that is. Now comes Vollrath with a lively, accurate, and essential corrective to Gordon's pessimism: growth is slow today, he demonstrates, not because our economy is failing but because our economy has succeeded."
— Brad DeLong, University of California, Berkeley

"Vollrath offers a provocative new explanation of the slowdown in economic growth experienced by the US economy during the past two decades: we are a victim of our own success. Rising leisure, declining fertility, and the shift out of manufacturing into services explain the bulk of the slowdown in aggregate income growth. Each is a feature of a mature, developed economy, and in that sense, the slowdown may be a symbol of success rather than a sign of failure. Brilliantly supported by the latest research and engagingly presented, Fully Grown provides a startling, novel assessment of economic growth in the 21st century."

“Anybody who has followed Vollrath’s blog will have been eagerly waiting for this book. Fully Grown is essential reading for anybody interested in the future of the economy. It investigates why the United States and other advanced economies are growing more slowly than in the past. Contrary to conventional wisdom, it argues this slowdown is due to success, not failure. All the leading economies have aging populations, thanks to past gains in health, and are largely service-based, as material goods account for a shrinking share of spending. These two characteristics alone mean the economy will not expand as rapidly in the 21st century. There are plenty of other problems to tackle, from unequal opportunities to excessive market power; but, Vollrath argues convincingly, the growth rate is the wrong way to assess how well the economy is doing.”
— Diane Coyle, Bennett Professor of Public Policy, University of Cambridge

“This book completes, for me, a series of books that have come out in the last couple of years that help to explain the current state of the US economy and why we can be optimistic about a lot of what is going on.”

"Typically, lower economic growth is deplored because it squeezes private living standards and government programs. But in a fascinating new book, economist Dietrich Vollrath of the University of Houston challenges the conventional wisdom."
— Robert Samuelson

“Vollrath sets up a clear framework and expounds it lucidly.”
— Inside Story

"But what if slow growth instead reflects great economic success? That’s the provocative thesis of a new book, cleverly titled “Fully Grown,” by economist Dietrich Vollrath...Vollrath not only offers the proverbial two cheers for slower growth rates, but also explains why many oft-proposed policy solutions are not likely to rekindle rapid growth."
— Charles Lane

"It is refreshing today to read that the U.S. economy is not weak because of a trade war with China or a failure of innovation. According to Vollrath, it is growing more slowly because families have made different decisions about how to live their lives, and those decisions were only possible because of the economy’s previous success. It is conceivable,perhaps even likely, that the U.S. will never again see such a period of supercharged growth as it did in the second half of the 20th century, when it benefited from the tailwinds of life-changing innovation and abundant labor. The lesson of Fully Grown is that perhaps it doesn’t need to."
— Mike Jakeman

"Why has the growth slowed in the high-income countries, notably the US? Is it a sign of failure or of success? Vollrath argues that it is the latter. Thus, the main reasons for the slowdown in the early 21st century are demographic - smaller family sizes and ageing - and the shift from goods to services. The failure to accelerate the overall rate of growth of productivity in the services is striking. Given that reality, Vollrath is right."
— Financial Times

"A combination of admirably lucid, engaging exposition and well-informed synthesis, Vollrath’s book is a must read for anyone interested in long-term trends in the US economy. . . . Highly recommended."
— Choice

"The post-World War II years brought unprecedented economic growth to much of the world, resulting in massive declines in poverty and huge wealth. How long can this go on? In the United States and other highly developed countries, economic growth has slowed significantly after 2000. This book examines the fundamental causes of this slowdown...[Its] findings are important because they imply a new normal of slower growth in the economically advanced countries."
— Population and Development Review