Rhetorical Renaissance: The Mistress Art and Her Masterworks (Paperback) 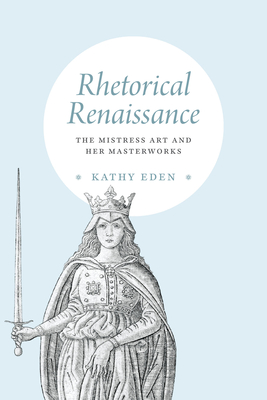 Rhetorical Renaissance: The Mistress Art and Her Masterworks (Paperback)

Kathy Eden explores the intersection of early modern literary theory and practice. She considers the rebirth of the rhetorical art—resulting from the rediscovery of complete manuscripts of high-profile ancient texts about rhetoric by Plato, Aristotle, Cicero, Quintilian, and Tacitus, all unavailable before the early fifteenth century—and the impact of this art on early modern European literary production. This profound influence of key principles and practices on the most widely taught early modern literary texts remains largely and surprisingly unexplored.

Devoting four chapters to these practices—on status, refutation, similitude, and style—Eden connects the architecture of the most widely read classical rhetorical manuals to the structures of such major Renaissance works as Petrarch’s Secret, Castiglione’s Book of the Courtier, Erasmus’s Antibarbarians and Ciceronianus, and Montaigne’s Essays. Eden concludes by showing how these rhetorical practices were understood to work together to form a literary masterwork, with important implications for how we read these texts today.

Kathy Eden is Chavkin Family Professor of English Literature and professor of classics at Columbia University. She is the author of four books, recently, The Renaissance Rediscovery of Intimacy and Friends Hold All Things in Common, winner of the Roland H. Bainton Prize of the Sixteenth-Century Society. Among her other awards and honors are fellowships from All Souls, Oxford, the Rockefeller Institute, the Guggenheim Foundation, the Center for Hellenic Studies, and the Phi Beta Kappa Society. Eden was elected to the American Philosophical Society in 2019.

“This excellent book displays all of Eden’s characteristic focused learning and forensic sharpness of argument. Eden takes the reader on a serious journey, full of tight connections and startling insights, into the intellectual foundations of the Renaissance literary system. Rhetorical Renaissance is a significant contribution to our knowledge of the history of rhetoric and culture of the Renaissance, revealing how Renaissance writers thought and wrote by drilling down into the intellectual foundations of the age.”
— Colin Burrow, University of Oxford

“In Rhetorical Renaissance, Eden again shows her extraordinary familiarity with both classical and Renaissance literary culture. Her nuanced analyses prove that we have not yet reached an exhaustive understanding of fifteenth- and sixteenth-century literary culture, and her many unique and brilliant insights will exert a significant influence on our understanding of it.”
— Armando Maggi, University of Chicago